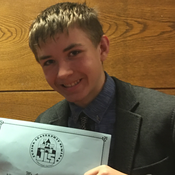 By Hunter Neal the Real Deal
8 comments
It is Bill and Ted from the movie Bill and Teds excellent adventure. I built it because I designed my own kind of character and then made Bill and Ted because it is favorite movie of all time. I think it would make a good set because it was a good movie and other people most likely like it like I do. Also the third movie just recently came out. I also made the characters for a short stop motion film that won a film contest. I have this film on my youtube channel witch is called Hunter Neal the real deal.