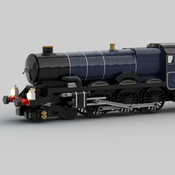 By Sethbricked
51 comments
The GWR Pannier tank is the first ever locomotive that I designed. The GWR pannier tank, or 57xx, is one of the most iconic classes of GWR tank engines. They produced 863 of these engines and some are still in use today. I built it because it is one of my favourite steam locomotives in Britain. I believe this would make a good set because it'll give many adult fans of Lego another articulated build to put on their layout. Also their are not many Lego steam engines made by Lego. There are many Lego train fans out there, and this would be a great opportunity for them to build one of the most iconic British tank engines