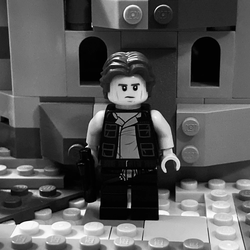 HanSolo246
27
265
days left
This is the submarine from one of Disney's most iconic film "20,000 Leagues Under the Sea." In this model it includes three Minifigures: Captain Nemo, Conseil, the first mate, and a crewman. I built this model because I am such a big fan of the film and the story. This would make a great set because it is a very detailed ship with rooms and hatches to open and play in. Also, it captures one of the the most memorable submarines in movie history.
27
265
days left