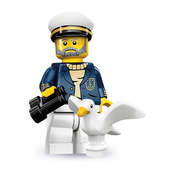 By JildosLegoPlanet
35 comments
Flying on near-zero gravity over dusty plains, looking for valuable resources. Of my generation (born in the early 80s) haven't played with the iconic Space lego sets.
It is time to give this theme the revival it deserves with this Classic Space: Moon Base
Acustomed to modern Lego era, this modular setup has maximum display value, but also play value and not to mention maximum swooshability.
It comes with the following Features