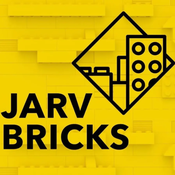 By JarvBricks
90 comments
I have the pleasure of presenting to you my LEGO ‘London Underground Station’. I have always wanted an underground rail system in my LEGO City, and what could be better than to capture the iconic London Underground.
I started with the background, which captures the look and feel of the tunnels; the arch that begins behind the track and rolls upwards until it is overhead. After weeks of playing around with various ideas, I found a method that I think works well.
I began to build from the basics, adding layer upon layer of detail: the platform, the badge, the stairwell, the seating, the 3rd rail … and a rat. At last, my station was complete. However, in order to capture the feel of the genuine London Underground, I also needed a London Underground train. Not only did I want the iconic colours of the train, but I also wanted to give a true indication of its size. Tube trains have a lower aspect and are wider than typical trains, so I needed to put some thought into it. After a good deal of trial and error, I was finally happy with the finished product.
The next task was to give the system some real power, and hey presto! A working underground train.
I was encouraged to present this MOC to ‘LEGO Ideas’ by friends and family, but it was far too big in its current format, so I rolled up my sleeves and set about creating a new station. This time I kept it to 48 x 32 studs. I knew I also had to design it to be easily transported, so I condensed my original design down to approximately 2000 pieces with minifigures.