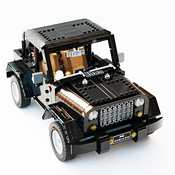 Here is probably one of, if not the most, iconic off-road vehicle in the automakers’ lineup, Jeep Wrangler Rubicon. Based on its unique design ques such as the seven-slotted front grill, bold protruding mudguards, beautifully curved hood with clearly stamped letters, and rounded top frames, huge number of variations have been developed by Wrangler manias over time.

The most difficult part of the construction was to join the hood and the two mudguards. I was stuck on this part for a couple of weeks, struggling to combine a slightly tilted hood module with 1x3x2 arch bricks and mudguard modules with angled technic beams. Though I have successfully managed to integrate them seamlessly as shown in the pictures after a series of attempts, better ways of joining these parts together must be sought out for more perfection.

The size is in the same ratio with official LEGO packages such as VW Camper Van, Beetles, and BMW Mini. Four 62mm radius tires are installed on its front and back axis, and a spare is hung on the hatch door. The roof can be easily mounted by gently putting the separable cover on the top frame, and it will be supported by the frame and held by two studs. Lastly, the engine part (provides no power) is placed under the hood.

I like to go out for taking photos in nature, so I put a miniature DSLR camera in this set, hoping that the owner of this car would also love shooting pictures as I do. For emergency stops on the road, yellow cones are necessary items. A tidy net provides the convenience for holding such essential accessories neatly in the trunk.

I think the best color for the Wrangler is definitely black, but yellow, orange, dark green, blue, khaki, or combinations of these colors would also be great matches for the car.

Further information about Wrangler Rubicon can be found from https://en.wikipedia.org/wiki/Jeep_Wrangler
Please visit my Flickr to see other LEGO artworks of mine https://www.flickr.com/photos/147060655@N05/
To check out and support my other projects just stop by at https://ideas.lego.com/projects/145398