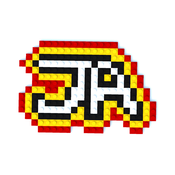 The Geonosian Arena -- Star Wars: Attack of the Clones

Many of you may(or rather, should) recall the capture of Anakin Skywalker, Obi-Wan Kenobi, and Padme Amidala on the Planet of Geonosis. While attempting to follow Bounty Hunter, Jango Fett, Kenobi lands on the planet and is shortly captured. Anakin and Padme then, of course, speed to his rescue, and after battling many Geonosians in the Droid Factory, they too are taken captive. We then see the three chained to large stone pillars inside a huge arena; the three are then sentenced to death by Count Dooku, and are attacked by three creatures: an Acklay, a Reek and a Nexu.

In the 17 years LEGO has been producing the Star Wars line of sets, several 'Geonosis'-based sets have been created, (Geonosian fighters, canons, etc.); but possibly one of the most iconic features of Geonosis, the Execution Arena, has never been conceived in Lego form. I believe (and so also do thousands of other Lego Star Wars fans that I have seen on blogs from around the World) that an Arena set would be a fantastic addition to any Lego collection. Below is a description and analysis of my rendition of the Geonosian Arena.

Cost: The cost for this set, I would estimate at around £50-£60, in order to cover the size of the set, the number of bricks, and also to take into account any new moulded pieces (e.g. Geonosian creature that pulls chariot). The price is not really affected by social / moral issues, but as it is ‘STAR WARS’ themed fans may pay more for this set than they would for a standard, simple set.

Customer: The product is designed for anybody of any age (really) who likes Star Wars or LEGO, or even anything in between! It will not have any impact on the customer’s way of life. The product has a very noticeable Aesthetic design; the three pillars are immediately recognisable to the target audience.

Safety: I have considered the safety of the product but it is made from 1185 pieces, meaning that it could split and break apart if knocked or dropped, and also caution should be utilised when using the 'jumper piece', 'Mini-Shooter Blasters' and the 'rock catapult' to avoid injury to eyes etc. But using simple general knowledge any danger should be averted.

Size: The set is of a good size for the type of set it is; it is not far too big or too small. For any builder this would make a perfectly sized playset.

Function: At the moment the product works very well, but does rely on LEGO producing a Geonosian creature mould for the chariot.

Materials: The majority of the set would be made from ABS Plastic (i.e. Lego), but certain rubber pieces (e.g. Geonosians' heads) and cloth features (e.g. Minifigure capes) would also be used.

This set is designed to be a playset for ages 6-14 with many play functionalities:

Please support this idea and help me get to 10,000 supporters, so that both your and my dream of a Geonosian Arena playset can become a reality.