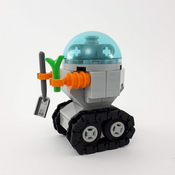 I finished building the engineering test model. Please excuse the crazy colors; because the main airship part is only available in a few transparent colors, I just decided to lean in to the colorful madness. The model seems to be sturdy and stable.  I knew the airframe would be solid, but I was worried about how securely the airship would sit in its cradle. In fact it is surprisingly secure. I bumped it a few times while working with it and it never tipped. The model can be slid around on the table easily without the airship threatening to fall off. My 4 year old has made many successful landings. Also, the elevator and turntable are working well. The loading platform for the airship uses 45 degree angle plates to hold together each section of the platfrom, but the angle creates offsets of a fractional stud between the platform and support poles on which it rests. And not simple half stud offsets that can be handled by jumpers; these are smaller fractions in both X and Y.

Possibly, I could have just used the natural flexibility of  the support poles to force them into alignment, but that never feels right and things tend to pop loose under lateral pressure like that. I suspect it would have been noticeable in the final model too.

Instead, I came up with a system using clips and bars that allows offsets in X and Y. It seemed to work fine in the digital model but I was worried about how it would all come together in the physical build, but it works great! 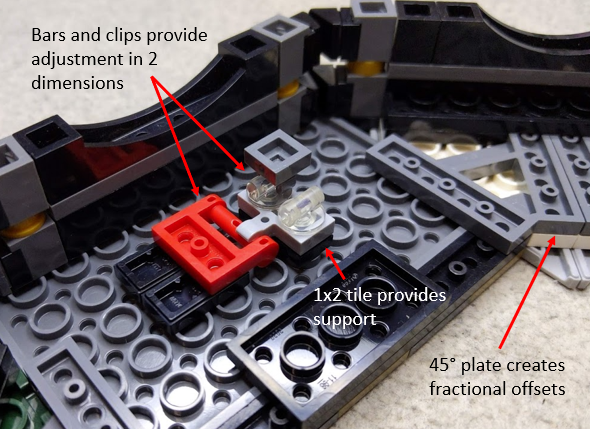 What do you think? Other ideas?

The test build of the station will be finished soon, then on to the airship!

I don't think I've ever built anything digitally that worked exactly as expected in real bricks. The main support poles (part 48002a) have a 2x2 base, but instead of the usual tube in the center of the underside, there is an axle hole. This means there is less clutch between the poles and whatever is below them.

In the picutre on the left, you can see that I have four sloped bricks under the pole, but the tiny gap between the sloped bricks, combined with the lack of a central friction tube in the pole means there is almost no clutch. Not good for a structure that has to support the weight of the airship and platform above. I really hadn't anticipated that. It worked just fine in the digital model  ;)

One solution, the intended one for this part, would be to add an axle, but there's no room to add that without changes to the design that I don't want: I'm really pleased with how the pole foundations look in the final model using the embossed bricks and slopes (see inset), so I'm not keen to change it. I could make the model one brick higher to give room for incorporating the axle, but that would make the model taller than the tallest existing modular building set, a limit I didn't want to cross.

In this case the solution was easy: The foundations had an extra layer of plates on the bottom (visible in the picture at left) that I simply shifted up to the top of the sloped bricks (visible in the picture at right). This eliminates the play between the studs that connect to the underside of the pole. Combined with the cross bracing to the other poles and the elevator structure, the model is quite sturdy. 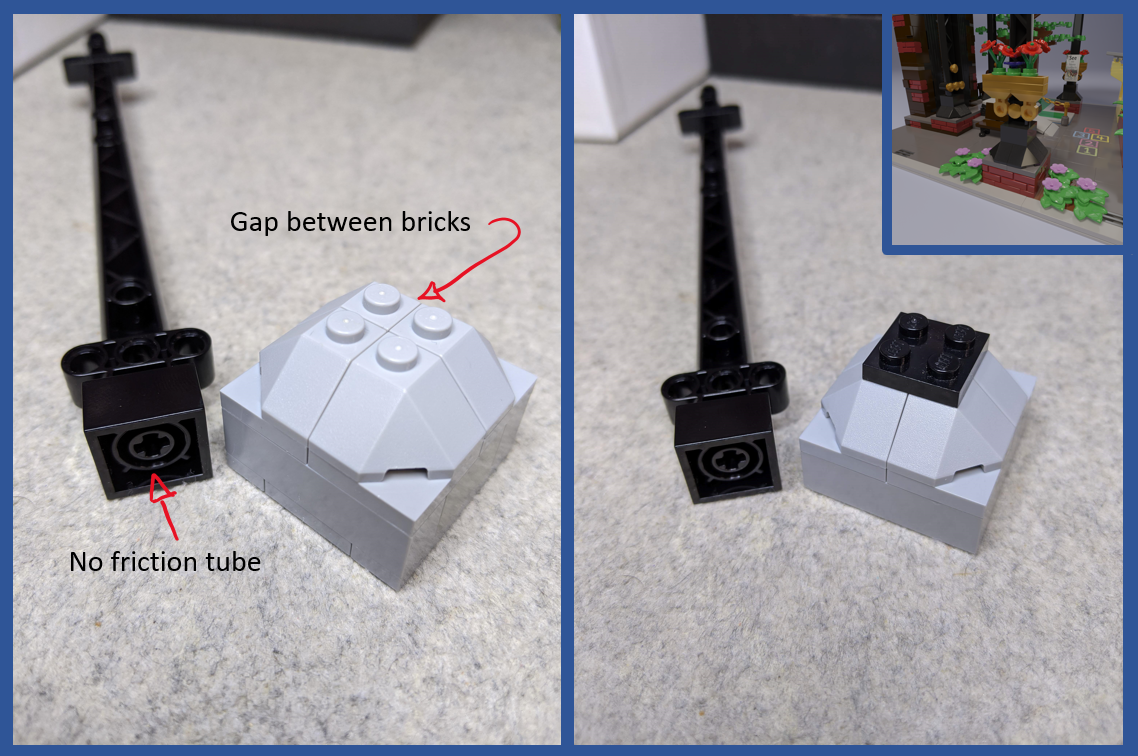 Starting the build in real bricks!

I've collected most of the bricks I need for a test version of the build. All of the structural and moving components will be tested and modified in the design as needed. That back and forth between the virutal and real builds is probably my favorite part of a project. I also enjoy working out the build step order, thinking of how to provide a nice build experience.

The colors, especially for the airship itself will differ a lot from the Ideas set because many of the parts haven't been produced in the colors needed. So I've decided to lean in to that and go for a very . . . colorful . . . airship.

The project is slowly gaining support, but it's a long way to 10,000 votes. If you haven't shared the project with your LEGO (or airship!) loving friends, please do! And thanks! I made another short animation showing how the Airship Station will fit with other modular building sets. Enjoy! And please share to help bring in more supporters.