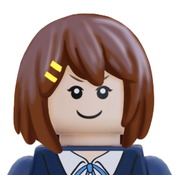 Welcome to the Light Music Club!
From Kyoto Animation's "K-On!" (based on the manga by Kakifly) comes Sakuragaoka High School Light Music Club!
This place is where Ho-kago Tea Time's members drink tea, eat delicious cake, and occasionally practice their instruments.
The main build consists of the Music Club room with as many details as one could fit inside: Ton-chan's tank, Yui's Frog, the white board, tons of band equipment, sink area, cabinet, air conditioner, book shelf, chalkboard, piano, cassette player & tape, and obviously the four desks surrounded by chairs and filled with yummy food!
The back wall is removable so you can have a better view inside!
Also included is a section based on the School Festival concert! (5 "HTT" shirt torsos are included to recreate their most famous performance!)
All five members of Ho-kago "After-School" Tea Time are included in the set, each with alternate expressions!
- Ritsu Tainaka (she comes with a hair accessory to recreate the bump she gets after Mio smacks her)
- Mio Akiyama
- Tsumugi "Mugi" Kotobuki
- Yui Hirasawa
- Azusa "Azu-nyan" Nakano (she includes a new piece introduced in LEGO Friends! The Cat Ears!)
Ton-chan the pig-nosed turtle is also included as a sticker on the tank build.
*** As for Sawako, Ui, Nodoka and Jun I would have love to include, but 9 figures seemed like a bit of a reach.
The first season of K-On! released on 2009, followed by K-On!! on 2010 and a movie in 2011.
K-On! is everything you wish from a slice-of-life series to have and then some. I'm sure anime fans as well as music fans will love to add these girls into their collection as much as I loved making them!
*After-School Tea Time group in LEGO form drawn by me*