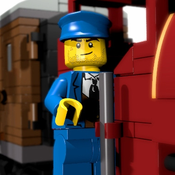 How do you follow on from the Emerald Night? Steam trains are the most iconic machines in history, and another Lego steam train is something I've wanted to get my hands on since i missed the opportunity to buy Lego's last steam train a couple of years ago.

My suggestion is to have a set that appeals to children, with playable features and power functions, and to adults with a beautiful steam train that's unlike any that Lego will have produced before.

The Emerald Night came with a few minifigures and a coach alongside the center-piece engine. A beautiful set, but with very few playable features. Instead of going for a bigger engine or more coaches, I thought i'd try down-sizing the train itself in order to add more playable aspects to the set.

After thinking about how to do this, I created a moving signal, controlled by a lever that is hidden inside a small signal box. It's a simple mechanism but it adds just a little something that can keep a child occupied for hours, pretending they're a signalman (Or signal-woman!).

Also in the set are 4 mini-figures; a Driver, a Mother, a child and an eager train-spotter. A small stone-brick station is also featured and an oval of track provides a starting point for a set, or an expansion to an existing one.

The set also has the capability for Power Functions, with a motor in the engine and the battery pack and receiver in the carriage.

I hope you like this idea, feel free to ask any questions you have!