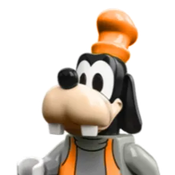 Welcome to Mayberry!  First airing on October 3rd, 1961, The Andy Griffith Show has been a perennial favorite of young and old alike. It is considered by many to be one of the greatest television shows of all time!
In the Lego IDEAS line we've seen several sitcom-themed sets, including The Big Bang Theory #21302 and Central Perk (Friends) #21319. But we've yet to have an IDEAS set from the golden era of television sitcoms.  Being big fans of the show ourselves, we feel this would make a GREAT set!
The Model:
The building itself is built in modular format, and is compatible with the Modular Building Line.  It is composed of two sections.  The base floor contains the Sheriff's Office, Cell Block, and Back Room. Details include: Functional Doors, Andy's Desk, American Flag, Filing Cabinet, Gun Rack, Bulletin Board, Bookshelf, Heater, and Cell Cots.  The back room and cell walls remove for maximum play-ability.
We were unable to add an interior to the second floor due to the 3,000 part limit, but if LEGO made this a set they would have no such limitations. The obvious details, though, would be Mayor Pike's Office, Howard Sprague's Office, Hall of Records, and hallway.
The roof is connected to the second floor and includes details from episode #95 The Big House, such as a chimney, light fixture, barrels, and trashcan.  We would've liked to add more, but we had to stay under 3,000 parts.
An essential sub-model for this set is the squad car. The car seats 4 minifigures comfortably, and boasts opening doors and trunk.
Other Info:
⦁ The model was achieved using existing LEGO parts and colors (excluding minifigures and custom prints).
⦁ Includes 7 minifigures: Sheriff Andy Taylor, Deputy Barney Fife, Opie Taylor, Aunt Bee, Gomer Pyle, Floyd Lawson, and Otis Campbell.
⦁ The dimensions of the building are 40 x 32 Studs. The squad car measures 7.3 inches (‪18.5‬ cm) long.
⦁ The entire model consists of 2,947 pieces (Whew, that was close!).
Closing thoughts:
If you are a fan of LEGO, The Andy Griffith Show, or both, and would like to see it become a set, please support and share. Thank you.