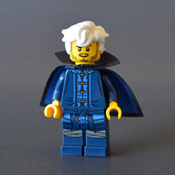 Recreate the heroic battle of the four Faction Leaders against the evil Maelstrom! Protect the Nexus Tower and the Imagination Nexus from the creatures of chaos. Fight on the front line in Crux Prime, go on an adventure in Gnarled Forest, train your body and spirit in Forbidden Valley, or upgrade your tech in the Assembly lab!

The model features iconic characters and locations from the game and lore, as well as minibuilds and accessories:

LEGO Universe was a massively multiplayer online (MMO) game that came out in 2010, and quickly became one of the most loved LEGO games by players and LEGO fans around the world. The game had many layers: imaginative worlds to explore, enemies to fight, quests to do, and items to collect (standard MMO stuff), but also minigames with customised vehicles, and a unique personal property system where players could build their own models and make them come to life. A 6-minute summary:

I remember seeing the epic trailers leading up to the release (as a teen), and being blown away by the sheer diversity of the game. I have always been more builder than gamer, so I spent more time drooling over the stunning wallpapers of the different worlds and the many all-original minifigure designs than actually playing. Unlike some players, I was not devastated by the closing of the game, but I felt dissatisfied that LU left only two little physical sets, while I had hoped for a whole wave... Five years ago, after yet another nostalgia plunge into the LU fandom wiki, I decided to take matters into my own hands and started designing a set that would do justice to LEGO Universe. I hope you like the result!

Special thanks to Umbra-Manis for supporting me and providing feedback the past years!

I am very grateful for the incredibly devoted contributors of the LU wiki. I could not have made this project without the information that they gathered and archived!

Finally, my deep respect to all the talented people out there that poured their hearts and souls into the creation of the game, and their empathy towards the player community following the shut down. The behind the scenes insights these people shared really shaped a proactive and passionate and lasting LU fanbase. You are amazing, thank you!