The Great Pyramid Of Giza 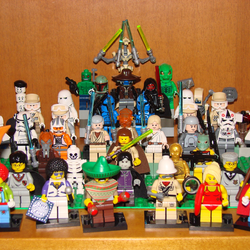 A Recreation Of A True Master Piece

The Great Pyramid Of Giza-Egypt

This Project was meticulously built in fine detail using over 4400 pieces this was a project that started life off as a what at first may seem like a simple pyramid. This is not the case this is not just a simple copy paste example of a pyramid structure. This precise build is based on 64x64 area, this being 4 bases of the 32 x32 boards giving huge scale and stunning effect to this Build set. The main exterior bricks are made up from 1x1 and 2x2 bricks place purposely for stunning effect.

The internals of the build reveal an accent to the Queens chamber suspended within the walls of the pyramid this then leads to another accent up to the king's chamber following the same precise angle from the queens chamber of -42.73 degrees (the main reason the angle of the raise is so precise is that the upper floor will not match the pyramid side to hold the suspended brace if the angle is too steep or not steep enough this did take some calculating and some deleting). This then giving similar effect internally to the actual structure made thousands of years ago in Egypt.

I would estimate this took 200hrs+ to create that been a guess, although taking this into consideration the time spent on this model I would say anything from the hard-core enthusiast 4hrs to the expected 8hrs build time these obviously are only my guesses however any LEGO fan would have great fun doing this model.

The main picture shows a duplicate of the top section showing that this can be removed to access a viewing panel within the pyramid, The set would also be accompanied with a LEGO pharaoh figure and a detail plaque with the relevant information.

This set would be a fantastic addition to anyone's collection sitting perfectly alongside the likes of the Taj Mahal and Sydney Opera House. A Brilliant Set for the expert / more self challenged builder amongst us.

Hope you all enjoy the idea and get behind this, as this been produced would be great fun for all.