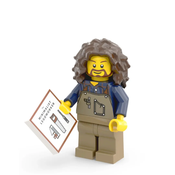 The Golden Trumpet tree (Ipê-amarelo in Portuguese) is one of my favourite Brazilian trees and, inspired by the recente LEGO Botanical series, I decided to design a realistic looking one.
First, a little bit of context about the tree and myself:
My name is Douglas Lambert, and I a director, producer and video editor from Brazil.
When I was born my parents moved from the state of Minas Gerais to São Paulo, both in the southern region of Brazil. When I was growing up, almost every weekend involved a road trip to my grandparent's house. Since I wouldn't shut up in the back seat, my father invented this game where my brother and I would count how many Ipês we spotted along the road. The contrast between the shades of green in the hills and forests and the bright yellow of the flowers made them very easy to spot. Who spotted more trees would win... I don't know what we would win because there was never a winner. One of us always ended up sleeping mid-game.
Although it is still relatively easy to find Golden Trumpet in the wild, the trees became very common in urban settings due to its relatively small size when cultivated and it's beautiful flowers.
This model is, in a way, paying homage to a beloved tree and a fond childhood memory.
Now some stuff I translated from Wikipedia:
The Golden Trumpet Tree, known in Brazil as Ipê-amarelo (Yellow Ipê) is a tree from the Handroanthus genus that can reach 25 to 35 feet tall with a spread of 25 to 35 feet. Yellow flowering starts at the end of August, the species is hermaphrodite, fruiting occurs between September and February, depending on the region, cultivated trees begin to reproduce at the age of three. The specific name "albus" stems from the whitish appearance of young leaves. In addition to the golden trumpet, there are several other trumpet trees with various flower colors, including pink, purple and white.
It occurs naturally in the semideciduous seasonal forest, Araucária Forest and in the Brazilian cerrado, in the states of Rio Grande do Sul, Santa Catarina, Paraná, São Paulo, Rio de Janeiro, Minas Gerais, Goiás and Serras do Espírito Santo. Native also in part of Argentina and Paraguay.
Although the Ipê is considered a symbolic tree of Brazil, the Brazilwood was declared a National Tree by Law No. 6,607 of December 7, 1978.