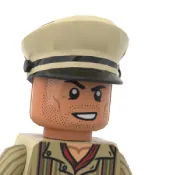 "Of all the Jungle Cruises you can take in the amazon this one is undoubtedly the cheapest.
But also the most thrilling." - Frank Growing up on adventure movies like "Indiana Jones" and "Romancing the Stone", I was on fire for the first moment when watching the trailer. The extraordinary boat was fascinating me a lot. There I knew, this will be my first Lego ideas project.
I was sure this movie would not only thrill me but the whole familiy.
Doesn't that make it the perfect lego set?

The large moldings of the Barracuda Bay fit very well, so I used them as my base.
This determines the length of the hull, because each hull section adds approx. 4 inches.
﻿﻿﻿﻿﻿﻿﻿﻿﻿﻿﻿﻿﻿﻿﻿﻿﻿﻿﻿﻿﻿﻿﻿﻿﻿﻿﻿﻿﻿﻿﻿﻿﻿﻿﻿﻿Therefore I opted for the shorter version, which looks rather cutier.
My early brick model only included already existing parts, for the render model I made usage of some non-existing color variants.
In return, I had to do the render without the very new, printed corner macaroni tiles that are not yet available in the digital world.
The charming rotten style of the La Quila is imitated by different shades of brown. Some Lego Technic parts were used for the steampunk elements. I tried to include as many original details as possible, but bear with me, my knowledge was based just on two movie trailers.
If you are missing something essential, please drop it in the comments. A special feature of the boat is of course the old, but still amazing engine that has to be fed with coal. The boiler has hatches on two sides and a box with coal is provided.
In the cabin there are some measuring instruments and next to the classic steering wheel sits the gearshift. Many steampunk-style carburettors are installed in the bow, which are apparently elementary for the engine operation.
At the stern, next to tools and cooking utensils is the sanctuary of the boat, hidden under a flap:
"The Miracle Engine" - This marvel of engineering, of course, requires a unique smokestack, which is probably one of the main eye-catchers of the La Quila.

Since the space on the boat is very limited I have added only two minifigures.
This is none other than the amazing Dr. Lily Houghton and Frank Wolff as your charming skipper.

Frank got a very individual styling. To find the perfect face I even created a voting on the social medias. Personally I like the gentler Frank but it seems the majority of supporters want a rougher adventurer. Anyway, I am quite satisfied with the result:

Thank you for reading this far!
I started the project with real Lego bricks and digitalized it in the meantime. This took me a lot of time because I had to learn the programs first, but I think it was totally worth it.
The price of the set could be attractive because it consists of only a little more than 500 parts.
I also plan some more improvements in the near future.
If you enjoyed my Idea, come aboard and give me support by pressing the little button on the top right. And leave a comment on what you like and what you don't. 👂
Together we will make this a real Lego Set.
Thanks a lot! 🙏❤️🤠