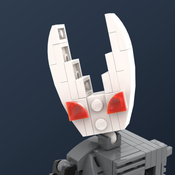 By Legopenguin114
14 comments
"I first battled the Metroids on planet Zebes. It was there that I foiled the plans of the space pirate Mother Brain to use the creatures to attack galactic civilization." -Samus Aran
Unfortunately for Samus, the space pirates Ridley and Mother Brain have returned and have stolen the baby Metroid from the Galactic Civilization... again. Luckily for the larva, the bounty hunter has returned to retrieve the Metroid and eliminate the pirates once and for all... or at least until the next reboot.
This Lego model, based off of the 1994 Super Nintendo Entertainment System game Super Metroid, captures the essence of the game. With all of the models based off of the characters' and objects' sprites, the model successfully brings Samus and her enemies into the third dimension, bringing along a few companions from the other Metroid games.
Included in the set would be buildable figures of Ridley and Mother Brain, along with a buildable model of Samus Aran's spaceship as it appears in Super Metroid, along with a buildable figure for the Metroid larvae.
Also included in the set are three minifigures representative of Samus and her enemies in Super Metroid and the other Metroid games throughout the years:
If this model gains 10,000 supporters, it has a chance to become an actual set. So please support it, and see you next mission!