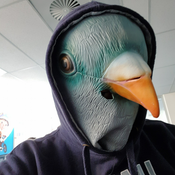 This is an interactive Lego model of a V8 overhead valve engine, such as can be seen in older or classic cars. This model wasn't based on any specific engine in particular but has the same basic features that an engine of this type would have.

I have tried to design a model that is not only enjoyable to build and display, but also somewhat educational and interactive. Many of the parts of the engine can be disassembled and reassembled, such as the air filter housing, carburettor, engine head covers, water pump, pulleys, alternator, power-steering pump, engine heads, sump and the exhaust manifolds.

The model also features a crank 'handle' in place of where the gearbox would normally be situated, and when turned by hand should actuate the pistons in the cylinders. The crankshaft is linked to the camshaft above via 'timing' chain and gears, and thus when the handle is turned it should also turn the camshaft, which should actuate the push rods and rocker arms in the engine head.

All of these features can be seen in the various renders that I have shown, although I should note I haven't physically tested the mechanism as I am unable to build this model outside of a cad program.

I should also note that the ignition wires are 'based' on the flexible axles that Lego provides, however I wasn't able to use the exact piece that Lego offers as there is no support for flex objects in stud.io. I simply modelled and extruded them using Maya, and I am confident you could get the same result using two or more flex axles connected together for each wire.

Lastly, the renders of the engine with the wires had to be done using Renderman in Maya, and the other renders were all done in stud.io and more closely resemble the correct colouring.