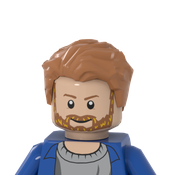 “You're gonna need a bigger boat.” - Police Chief Martin Brody
“Will this be big enough?” – Lego Pan Brickworx
45 years ago, on the last day of spring 1975, the world’s first true summer blockbuster movie came splashing into theatres. Touted as one of the greatest films ever made and solidly placing director Steven Spielberg’s career on an astronomical path to success, Jaws has become a cult classic that even after 4 decades has affected popular culture and media around the globe. With several sequels, a memorable score that can still be hummed to this day and making over $470 million in box office sales, Jaws set the stage for the future of film, merchandise, and advertising in the media industry.
My girlfriend and I were talking about her favorite movie and our love of Lego and how we wished that there were a Jaws set out there. Sadly, after doing a lot of digging and research, we could not find one we really liked so I decided to design one myself.
I decided to make a set that featured the main elements of the movie: The 3 main characters, the Orca and “Bruce”, the affectionately named shark that is known around the world as “Jaws”. Then I wanted to add a base to display the set in a way that reminded me of a model ship and a second option that allowed the builder to display it in the iconic attack scene where the shark breaks off the stern and leaps into the boat to catch Quint.
The full set consists of over 1880 pieces! The Orca is 16.5 studs wide and over 57 studs in length. But that is not all, I couldn’t just include a typical Lego shark… Bruce is built to scale at 34 studs long from nose to tail, and fully articulated, staying true to the scale and drama in the Spielberg movie!
This set is designed for both playability and display. The Orca and the shark are removable from the display base and have a ton of features including a full interior, the iconic yellow barrels, a fully posable shark including mouth, fins and tail, shark hunting gear, a fire extinguisher for when a captain goes a little overboard and so much more! If you are an adult fan or a collector, this set can also go right up on the mantle in 2 different display configuration options: The Model Ship display or The Action Shot display, the choice is yours!