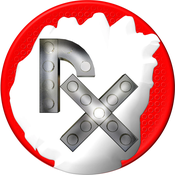 The Robust Robot is back! The strongest robot from the future, Robust, protects the earth and other planets as he fights evil robots and sci-fi villains. His head, shoulders, torso, arms, hands, and legs can turn in full 360 degree angles. Also, his feet can rotate back and forth. His weapon is a sword with a cool light on the edge that can blast lasers at the enemy. His sword can also split into a double sword and can be connected to Robust's back as shown in the last picture. Other weapons that Robust has is lights on his torso, arms, hands, and knees that can shoot laser and/or power blasts at the enemy.

In addition to his futuristic stile and muscular looks, Robust has great balance and can stand on one foot. He can sit, crawl, squat, stand on his hands, and can do a number of poses. He would make a great Lego set for kids and teens who are looking for an action-packed, robotic, action figure that has great mobility. All these feature can be seen in the Robust Robot! His catchphrase: Let's bust the move!