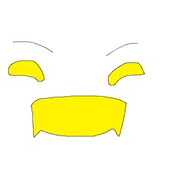 By Lammet
16 comments
Bloodhund LSR (aka Bloodhound SSC)
A project that aims to make the world's fastest car to break the land speed record and go over 800mph.
It will be achieved with the help of a jet engine taken from a Eurofighter and a rocket engine.
I've been following this project for a couple of years now, and recently there hasn't been any progress towards actually breaking the record. Due to the circumstances in the world, there's not much that we can do, which has left me with lots of time. So, I ended up making the Bloodhound into LEGO.
This is a car that aims to break the land speed record and is at the forefront of technology I do believe this would be a great LEGO set, in the event that the car actually breaks the land speed record. If that happens, the car would write itself in the history books, and you know that LEGO likes that stuff, also it would make people more interested in a set like this.
Design
The goal for me with this model was to fit a minifigure in it and also have an interior that resembles the one of the real car (jet engine and rocket :) ) In terms of dimensions, I tried to make it proportional to the wheel based on the real car (no real measuring). The wheels being the only constant, since there isn't much choice of wheel to use with LEGO. This design is far from perfect and there are some weak points that should be addressed.