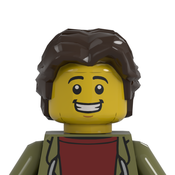 This project is based on the famous comedy series Modern Family. A tv show where you get to follow the life of three different but related families and.I got introduced to this Tv show quite recently and I fell in love with it instantly and decided it would be fun if it was a LEGO set based on it for all of the other fans out there.

I decided to base this model from the first season, as you can see on my choice of characters that I picked. However you could definitely base it on later seasons. So that you for example would get the character Joe Pritchet and the dog Stella, and maybe even Haley’s and Dylan’s twin children, Poppy and George.

The model contains the three houses the characters live in and where a lot of the scenes unfolds. The houses are not perfectly accurate but I have tried to at least capture the iconic features and interior. The whole model is built with around 3000 parts. However it could be a lot smaller if you for example just made a couple of rooms from the show and not the whole house facade, something like the LEGO Ideas Friends set (21319). Then the model would probably contain less pieces and more people would be able to buy it.

I would have loved to put more details to the build and easter eggs from the show but with LEGO IDEAS 3000 parts restriction that was unfortunately not possible.

I would love to hear your thoughts about this project in the comment section below!

If you would like to see this project become a real LEGO set then click that “SUPPORT” button. Every single support counts! Also, feel free to share this project to friends and families!