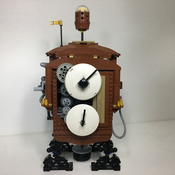 By mitenko
20 comments
This is a fully functional mechanical LEGO clock. I have been interested in the idea for some time, and it has been the most challenging design and build I have ever made. With its ticking second hand, minute hand and hour hand it is accurate to within a minute per day, and with its self-winding weight it will run for at least several weeks. It won 'best Technical build' last week at the Bricktober Lego convention in Perth.
I have learnt and applied the principles of clockmaking as I developed this project over several months. A hanging weight is the force which drives the mechanism. The escapement mechanism gives the pendulum a little push each swing, and then 'ticks' softly as it stops the escapement gear before the next swing. The timing, accurate to within about a minute per day, is controlled by the pendulum. Creating the gearbox with proper gear ratios for the second, minute, and hour hand all on the same axle using Lego gears while keeping friction to a minimum was... a challenge. It is particularly satisfying to have it quietly ticking away as the highlight of a Lego collection.
Now that I have this prototype up and running and all the Technical issues worked out (!), I plan to shrink the entire clock to a more reasonable size for next year's exhibition. If I find a way to do this, I will submit that Idea as well.
The self-winding weight is a concept I have adapted from Mr_Kleinstein's Wall Clock, and if you support this Idea I strongly encourage you to support his as well!
Videos of this clock are on Youtube: