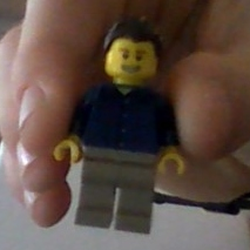 Their symbol is the spade, which is the yellow thing on the top. This took me 3 hours to make.