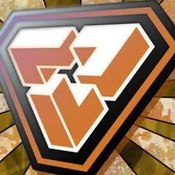 Apollo 11. The mission that would define all of NASA's achievements. One of mankind's greatest accomplishments.
The crew was made up of three of the best and most exceptional astronauts that had flown in the Gemini program. These astronauts would keep a cool head when things got tough and were devoted to completing their mission.
And devoted they were. During the descent they found that the landing zone was too rocky to land on an that the LM's computer was becoming overloaded. But with only seconds of fuel left they fount a suitable landing site. Where they radioed back "Houston, Tranquility Base here, The Eagle has landed!"
There was applause in mission control. They had finally done it. What furthermore completed the mission was Neil Armstrong becoming the first man to walk on the moon. The scene was broadcast live to earth and filmed on an external camera on the LM. Forever immortalizing the moment were his words "That's One Small Step For Man, One Giant Leap for Mankind"
After several hours f surveying the crew scooped up samples and headed back to earth.
The mission was completed, But the Apollo program was not over yet. 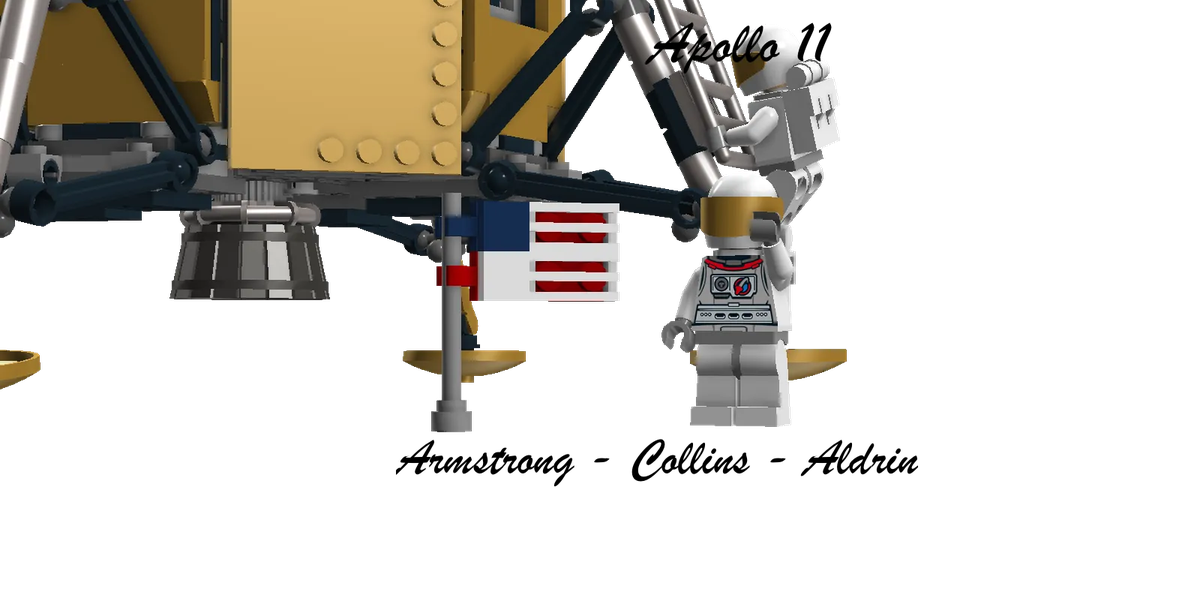 Apollo 10 was to be the full "dress rehearsal" for a lunar landing. accomplishing everything a lunar mission would apart from landing. The LM (Snoopy) separated from the CSM (Charlie Brown) and went as close as 60 miles from the moon's surface. Many ask "why didn't they just land?" Many in NASA at the time asked the same time, and in retrospect they could have. However, there were many unknowns and they wanted at least 2 successful moon orbiting missions before attempting a landing.
Apollo 10 was classified a success. And after would come the most legendary mission of them all. Apollo 11. 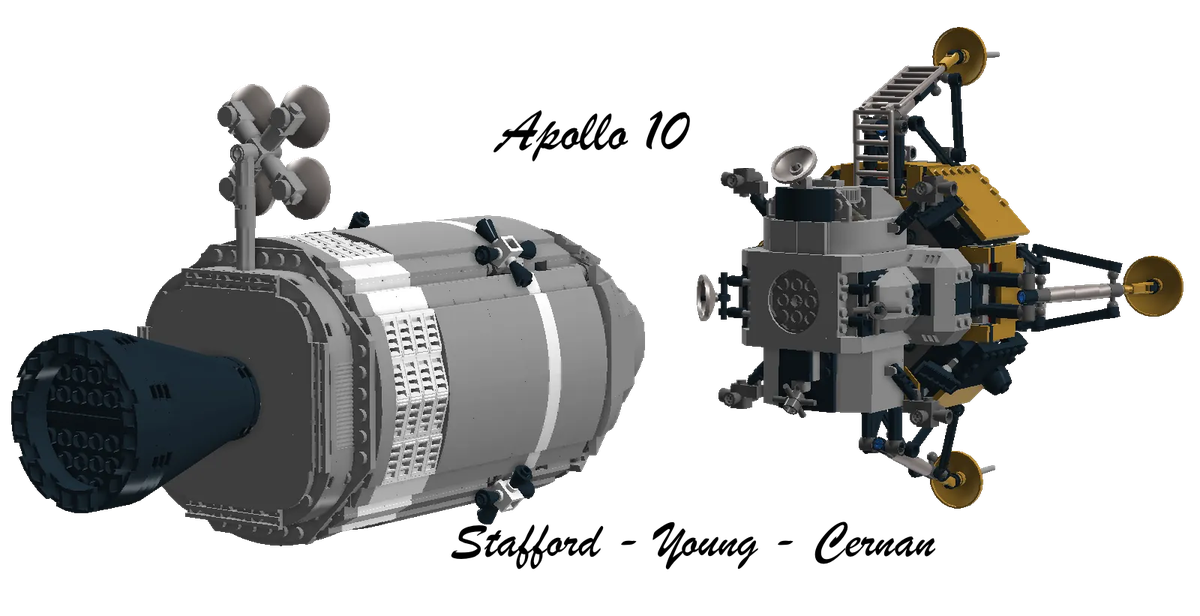 Apollo 9 was the first manned test of the Lunar Module.
Carried out in earth orbit. This was also the first time since Gemini 3 that spacecraft were given individual names. Since two craft were in space, it was felt that they should have callsigns (CSM was Gumdrop, and the LM was Spider. Rather fitting.) to ease in communication.
Also practiced in this mission was the emergency LM entry from the CSM's hatch should the docking tunnel fail.
The mission, while forgotto, was an important test, and now it was time for a full dress rehearsal for the lunar landing. Apollo 10. Apollo 8 was originally planned to be the first mission to test the LM, however, Grumman had setbacks on providing the LM. So instead an audacious mission was proposed.
Send Apollo 8 to orbit the moon.
The idea seemed almost impossible, but after much debate and calculations, the mission was a go. We were going to the moon.
On December 20th 1968 Apollo 8 launched. For the first time man had escaped the gravitational pull of the earth and was going to the moon.
The mission made it to the moon on Christmas Eve, 1968. Transmitting the first images of the earth as seen from the moon. They accompanied this with a special reading of the first verses of the Book Of Genesis from the Bible. This moment raised the patriotic spirits of America.
We were almost to the finish line.

After several capsule redesigns after the Apollo 1 fire and three successful unmanned test runs they were finally able to perform the Apollo 7 mission which was to test the performance of the CSM in earth orbit.
However, once in space commander Wally Schirra became sick, and developed a salty attitude towards the daily broadcasts from the capsule. Which resulted in a day-long mutiny which resulted in no video transmissions for an entire day.
However, the crew's mode finally lightened, and they then continued their broadcasts.
Despite these little hiccups the mission was deemed a success. And paved the way for the "Christmas Miracle" Mission. Apollo 8.

Apollo 1 was to be the first manned launch of the Apollo capsule. Crewed by veterans Gus Grissom, Ed White, and rookie Roger Chaffee. But the mission was wrought with issues. During a "plugs out" test the crew had a hard time communicating to ground control. But unexpectedly a spark from a frayed wire ignited in the 100% oxygen environment of the capsule. The fire quickly spread. The crew never stood a chance, the hatch taking 90 seconds to open from the inside.
The recovery crews came, it was too late.
The Apollo 1 tragedy was terrible, but the country knew that it must press ahead if it was to succeed in the mission as the astronauts wanted it to.

Gemini 12, the last mission, this would prove that we were truly ready for the Apollo Program.
The mission would be accomplished by Gemini veteran Jim Lovell and rookie Buzz Aldrin.
Aldrin had trained tirelessly for months to make sure that everything went right.
The trouble started when they had to dock with their Agena, only to find that its radar had gone out. Collins on Gemini 10 had tested docking without radar, and had failed. However, Aldrin was known as "Doctor Rondezvous" and was undeterred. He was easily able to dock the Gemini with little more then his eyes and a sextant.
Aldrin's job now was to perform experiments during his second EVA that were housed at the rear of the capsule. The "Busy Box" as it was called. He used the newly installed foot restraints to perform the experiments. He finished without breaking a sweat. Proving that routine tasks could be performed during an EVA.
With the success of the Gemini missions, America was now ready for Apollo.

Gemini 11 was the penultimate mission of the Gemini program. Its mission? set a record orbital altitude.
Once it rondezvoused with its Agena it docked and undocked 5 times to test docking accuracy reliability. Then once attached it used the Agena's engines to rocket up to an orbit 850 miles above earth. An orbital altitude record that still stands today (Apollo doesn't count because they were orbiting the moon 250,000 miles away)
Up there they also measured radiation to see the readings from the outer Van Belts. Luckily they found that the radiation readings inside the capsule to be far lower then expected. Another green-light for the Apollo program. 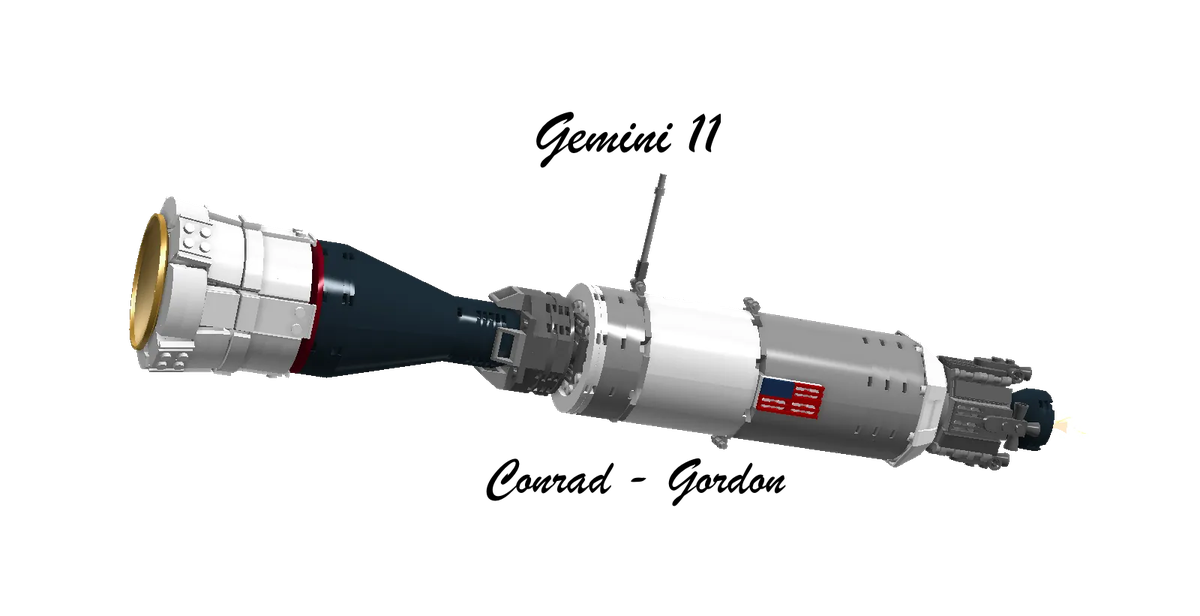 The Gemini 10 mission was to be the first time a spacecraft had docked with two different spacecraft.
First docking with its on Agena, then performing a docking with Gemini 8's Agena to retrieve a micrometeorite sample plate. The Gemini 8 Agena's batteries had run dead so ground control had absolutely no control over it, making the docking evermore risky. But it was done successfully, and Micheal Collins (who later became the Apollo 11 command module pilot) completed the spacewalks successfully. Experimenting with newly installed handrails and gathering valuable information for future missions.

I'd like to start out by saying thanks for 100 supports! you guys are great! :D
The Gemini 9 mission was supposed to be the second mission to dock with an Agena, however, once off the ground the Agena exploded. So they used the backup Augmented Target Docking Adaptor instead. the ATDA was made up of spare Agena and Gemini components, and had never been used before.
However, once in space the ATDA's shroud only partially opened, several mechanisms failed to engage, leaving it looking, as commander Tom Stafford put it; "Like and Angry Alligator"
Plans were made for Gene Cernan to release the shroud during his spacewalk, However, due to the uncertain dangers associated with this and the difficulty he had maneuvering in space (His visor becoming fogged by his breath multiple times) this plan was abandoned. NASA learned a valuable lesson about adding hand rails to improve spacewalks and about accomplishing practical work in space.
the ATDA itself is 105 pieces, and could be included in set if lego felt the need. The build itself pretty simple and plain-looking as the real thing was not much to look at, and adding detail would require lots of custom printing and rubber bands on the shrouds.