Skylab 4 was the third and final mission to Skylab. The crew consisted of astronauts Carr, Gibson, and Pogue. they were all rookie astronauts, and the 84 day mission was full of tightly scheduled experiments and tasks, and after a few weeks the had had enough of the the flight planner's micromanagement, and one day during a pass over a transmitting station they forgot to re-adjust their antenna, this alarmed NASA, Burt just an hour later they had regained communications. However, just the next day the crew gave a lengthy report complaining of their stringent schedule, refusing to do tasks and essentially committing mutiny. But NASA relented and eased up on the schedules, this improving the working conditions for future missions, and improving flight controller-NASA relations. And so as quickly as it began, the Skylab 4 mutiny was over. Skylab III's crew of Bean, Lousma, and Garriot were to stay on the station for 59 days and were to perform experiments on the human body in prolonged space environments. The mission was a success publicly, but some theories persist that the crew were visited by a UFO. This is highly disputed and is mostly thought to be fake, but serves as an amusing footnote for an otherwise textbook mission. 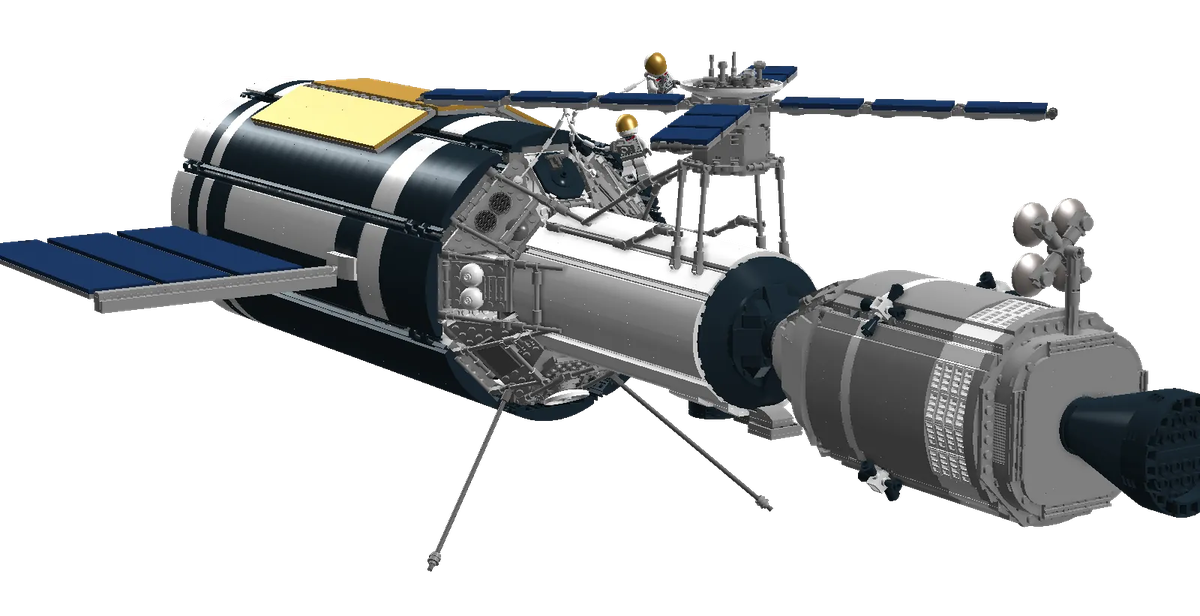 The Skylab 2 mission (The '2' referring to the launch vehicle, while on mission patches it is referred to as Skylab 1) was to fix the stranded Skylab station. And the astronauts had quite the job.
First, the astronauts entered the station, which was baked by the sun without a micrometeorite shield.
Using one of the auxiliary airlocks they were able to deploy a sunshield to insulate against the heat and protect the station. The sunshield was stitched from special insulating mylar. Which is the same foil material used on many spacecraft even today.
After this they had a more daunting challenge, to release the remaining solar array.
Using wcrecutters and makeshift tools they cut it free. The solar array flung open, sending the astronauts flying, but they were tethered, and what would have terrified many left them barely ruffled.
With these valuable fixes now installed, they went ahead with their research and stayed a record 28 days aboard the station. In 1973 the US was finally able to launch their own space station to counter the Soviet's Salyut.
This station was dubbed Skylab.
Skylab was built using the shell of the 3rd stage of a Saturn V rocket. The station as designed (lower picture) was to have 2 solar arrays, a telescope, and docking ports for 2 Apollo spacecraft.
However, during launch there were a series of malfunctions. The micrometeorite shield was ripped off from aerodynamic strain, and with it came a solar array. The other solar array was pinned to the side. The station was badly in need of help, but what could they do to rescue the station?
That job would be up to the first team of astronauts on the station.
The Skylab II mission.
The build below is my mini figure-scale Skylab. I was going to submit it, but according to the moderators it interfered with the NASA Apollo IP. 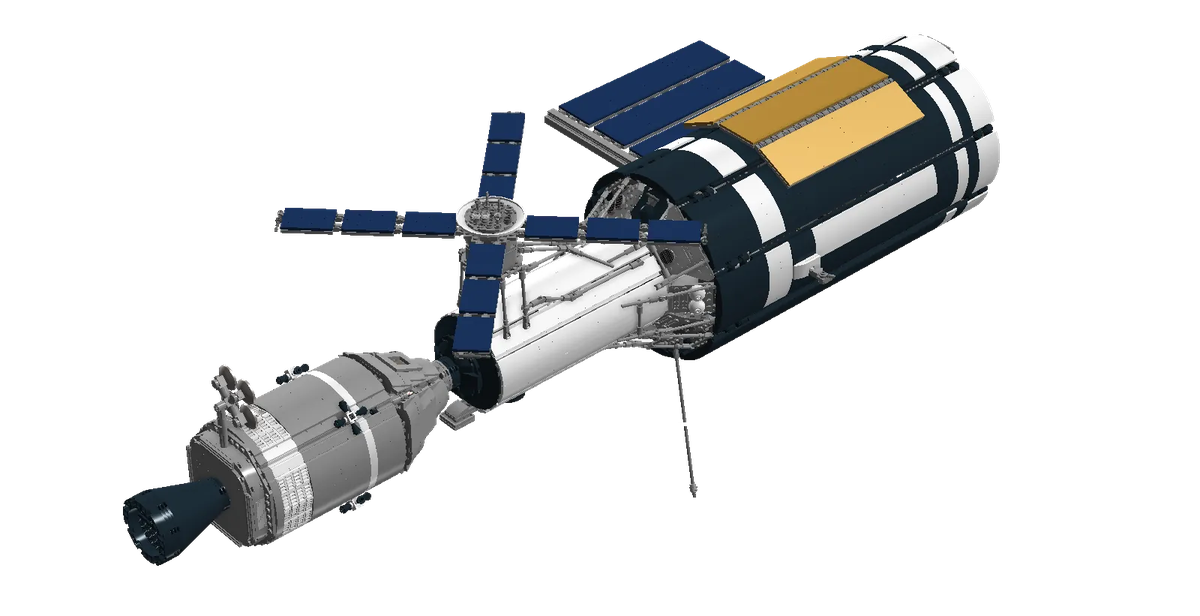 The final mission to the moon. The Apollo program was originally going to have an Apollo 18 and 19 (and they had already produced the CSM, lunar lander, and Saturn V for these) but NASA underwent budget cuts, and Apollo 17 was now to be the Swan Song for the Apollo lunar program.
The mission had many firsts, it was the first mission to have a civilian geologist aboard (Schmitt) and first to have a roadside repair in space. During deployment the Rover's fender was ripped off, and whenever the astronaut's drove it moon dust would be kicked up by the rover's tires and into the astronaut's faces.
To fix this they used a topographical map and some duct tape. And it worked! They were able to make the last mission one for the books.
And after all their EVAs at least it was time to go home. Gene Cernan was the last to enter the capsule, making him the last man to step foot on the moon.
And when the Lunar Module took off for a final time the camera on the front of the rover was finally able to capture it lifting off.
And for half a century the moon has remained untouched by human hands. Explored only by robotic satellites mapping its surface and occasionally landers touching down to make a survey.
But NASA's Artemis program now offers a glimmer of hope. Promising to send humans to the moon in 2024. Once again our horizons will have grown. And our rockets will be pointed to Mars.

Apollo 16 was the second of the J-type missions. Apollo 16 ended in the Descartes highlands. An area chosen because many thought it was an area formed by volcanic activity, though, to the chagrin of geologists and the astronauts, it wasn't. No rocks of volcanic origins could be found. However, the mission was still able to provide valuable scientific information about the region.
Apollo 16 would be the penultimate mission. And now the Apollo program would come to a bittersweet end with Apollo 17.

The Apollo 15 mission was the first of the J-type missions. Longer duration stays on the moon and more focus on science.
It was also the first mission to use a lunar rover to explore greater distances on the moon.
It performed many experiments and brought back valuable lunar soil samples, But the most famous mission is the one that mission commander Dave Scott did at the end of his last moonwalk. Broadcasted on TV, he demonstrated the moons lower gravity and how there is no atmosphere by dropping both a hammer and a feather. Both hitting the ground at the same time. Sometimes the most simple experiments can have the most captivating results.

Apollo 14 was the first mission to land on the moon since the failure of Apollo 13. It was also the last of the H-type short duration lunar missions.
The Apollo 14 landed in the lunar highlands and had a plethora of experiments to deploy on the moon.
The mission was made almost entirely of rookies, with the exception being Alan Shepherd, the first American in space. Who was finally able to go back to space after surgery on his inner ear.
Another first was the first game of golf in space. Shepherd brought a golf club head that attached to the end of one of the lunar collection tools and was able to bring it with him. playing the first game of golf on the moon.
Now that the short duration missions were over, now for the long duration missions. starting with Apollo 15. The Apollo 13 mission is probably one of the most famous of the Apollo missions. Not because they landed on the moon.
But because they didn't.
2 days into their journey, just as they were about to get some sleep they were told to give the liquid oxygen tanks a stir.
Nobody could've foreseen the defect in the liquid oxygen tank though, and that's when everything went awry. Swigert then uttered the forever immortal line "Houston, we've had a problem."
The tank exploded, the spacecraft began losing power, they had to shut down the CSM to preserve power and move to the Lunar Module.
The trip was harrowing, thee was so much room for error that some thought they wouldn't come home. But with some help from the experts at ground control mixed with gut instinct and nerves of steel, all three astronauts were able to make it back to earth safely.
On Nov 02, 2021

Apollo 12 was the second moon landing, landing in Surveyor crater and spending 3 times longer on the surface of the moon than Apollo 11.
The mission got off to a shaky start when their Saturn V was struck by lightning twice upon launch. Luckily a flight controller's extensive knowledge of switches in the Apollo CSM meant that he was able to save the spacecraft from having to perform an abort.
Their main mission (and the reason the crater was named) was to find the Surveyor 3. A robotic lander which was sent to the crater years earlier. The crew found the Surveyor and brought the camera back to earth. This mission proved that a mission could reliably land at their designated site.
Aside from these amazing accomplishments, Crewmember Al Bean later became a famous painter, painting moonscapes and scenes from his mission. And he used pieces of his suit which contained moon dust to texture his paintings. Meaning that each one of his works of art contain actual pieces of the moon.