Monsters Inc: The Door to Monstropolis 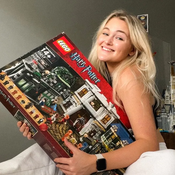 By HollyOnFilm
309 comments
Put that thing back where it came from or so help me!
Monsters Inc released in 2001 is one of Pixar Animation Studios most memorable and well loved films and is recreated into LEGO form in this set. Take to the scare floor with this Monsters Inc set by helping me and support my LEGO Monsters Inc project.
This giant recreation of Boo's iconic pink door, captures some of the films most memorable moments and locations in a dollhouse-like playset. Her door leads into a three levelled build featuring HarryHausens restaurant, Mike & Sully's apartment and a microscale Monsters Incorporated. Each floor features many details and prints referencing the movie, with the back's design shaped like the Monsters Incorporated building itself.
This is a great display piece and has three figures (with plans to add more), Sully, Mike and Boo. Sully is brick built using the big fig arms allowing for mobility and the option to hold Boo in his hands. Mike has a 2x2 tile of Boo's scare file and Boo comes with a bear as well as the classic Pixar luxo ball, a recolouring of the soccer ball piece.
Monsters Inc was one of my favourite movies growing up and as a massive Pixar and LEGO fan, I really wanted to create a project as a reflection of that. I had a great time creating it and trying and testing new build techniques to create this concept. The concept began as Boo's door on it's own and evolved into what it is today, thanks to the help of Ashnflash, who thought of having various rooms on the back. I had a great time creating it and hope you like it!