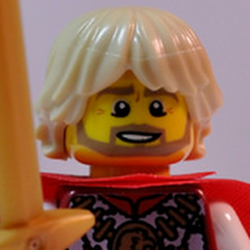 I have seen other designs of police buildings in the past but none ever really captured the look and feel of a real police station. I wanted to create a modular building of my own that would serve to house my various police mini-figures, act as a 'base of operations' and to tell a story. I based my design on a Victorian style turn of the century building that has been renovated to accommodate new uses. I propose to offer my creation as a template for a Police Modular building that fits in with the existing framework of the line for modular buildings.

My story for this building was that a bottle thief has been stealing rare collectors' bottles all over town. He had never been caught until now. He made the mistake of taking a bottle from the Police Chief's own collection. Once the theft was discovered the Police Chief directed his detectives to investigate 'leaving no stone unturned'. That they did and once they captured the thief, they sat him down to question him. The thief denies the whole thing and states he 'found' the bottle. Suddenly a witness had stepped forward to provide a statement. He claims to have seen the thief escaping from the station along the roof top. The thief gets up and runs to main floor and tries to escape out the back door but is stopped by the officer at the front desk!

On the first floor is the evidence room and the main desk for enquiries. To the left of the main desk is a waiting area near the staircase. On the right side is a side door out of the building. The main floor has fire alarms, clock, personal computers and an evidence storage locker along with a lever to push down to accept items in the slot as this is a secured room. The main floor is also a vaulted floor to show grandeur of old turn of the century buildings.

The second floor contains the detectives offices in order to perform investigations and interviews. This has a waiting area for suspects or witnesses, four desks for detectives and officers, as well as a refreshment area. Every police officer will need some coffee to keep going after working so many long hours. Along the wall is some art, filing cabinet, a clock and emergency lighting should the power go out!

On the third floor is the office of the police chief, aka 'Mr. Big' who work long hours and gazes proudly over his bottle collection and art. At the opposite end of the floor is the conference table with projector and screen to give presentations. There is a side door to go outside for some fresh air, along with a ladder to get to the roof. The roof also has a skylight and communications tower.

The building consists of roughly 2600 parts and three floors: the main lobby, evidence room, detective offices, and conference room. Eight Mini-figures could be included such as two detectives, the Police Chief, one thief, a witness, two police officers and a Post Officer riding his delivery bicycle!