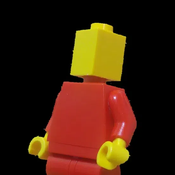 By The Yellow Brick
346 comments

Who doesn't like a cat as a pet? So who wouldn’t like a LEGO cat?
My idea was to design a lifelike and detailed Lego cat. It would be definitely a great construction as a Lego set, simply an eye catcher that everyone wants. It is a good idea for a Lego set because it approaches a large target group.
Information about the model
-  30,4 cm high; 20,3 cm deep; 17,8 cm wide
Contains: - 1972 Lego pieces
-   a cat; a bowl with milk; a fish bone
Progress
It all started with a black cat which I built out of bricks some time ago. I thought about posting this cat on Lego Ideas. Later, I wasn’t really happy about the result and could have done it much better. So I decided to design a completely new and much better cat in Studio 2. 0. For most parts, I used my cat « Miro » as a model, a cross of a Siamese and Birman cat. The project was developed over a period of several months. I started in July. I often didn’t work on it for several weeks and I proceeded step by step. First, I designed the legs, then the upper and lower body and at last, the head which was the biggest challenge for me. I designed many prototypes to find the best shape. For a long time, I was looking for a method to represent the eyes; I wanted to make them look very real. A big advantage was that I have cats at home, so that I could measure and compare again and again.

By The Yellow Brick
346 comments