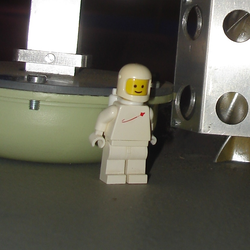 This is a detailed model of the lander Philae which landed on comet 67P/Churyumov-Gerasimenko on 12th November 2014. All instruments visible on the outside of Philae are detailed, such as SD2, APX, MUPUS, DIM, CONSERT, CASSE, and ROMAP, as well as ice screws and anchoring harpoons and some more. The body can be rotated about its vertical axis.

SD2, APX and MUPUS can be deployed.

The model is not exactly scaled (legs are slightly to short for the sake of stability), but built along detailed images of the real thing.