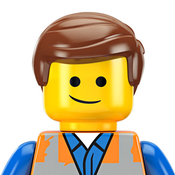 The iconic dollhouse built with Lego bricks!
Following on from my Lego Ideas project based on the safe from the first game in The Room series, I thought I'd try building something a bit more ambitious...
What is this idea all about then?
The Room 4: Old Sins is a puzzle adventure game made by Fireproof Games available on mobile & PC which features an enchanted dollhouse within which the game takes place. As one of the game developers I’ve often thought about how it would make a great Lego Ideas project, so after a lot of prototyping to keep the piece count below 3000 I created this digital build using the wonderful Bricklink Studio.
About this Build
The build consists of an extended façade with many architectural features, from the wrought iron gates and walls surrounding the house to details such as the ornate coat-of-arms plaque and detailed brickwork.
The build has a detailed interior which had to be re-organised to fit all the rooms in and make the best use of space. I managed to squeeze in every location featured in the game from the Foyer, Study, Kitchen and fold out Garden on the ground floor, to the Curiosity Room and Japanese Gallery on the first floor, the Maritime Room & Art Studio on the third floor and the Attic at the top of the house, containing a microbuild of the dollhouse itself. Each room contains a corrupted book just like in the game, as a 1x1 tile with a texture applied using Bricklink Part Designer.
The doomed Mr & Mrs Waldegrave also feature in this set as minifigures; Abigail with her paint brush & palette and Edward with his arrogant scowl! I also included a minifig for the mysterious player character referred to by the codename ‘H’.
Please Support!
If you’re a fan of The Room games or Lego houses (or even a fan of both!) then please add your support and hopefully we can turn this from just an idea into a real life Lego set.
Thank you for your support and sharing my project and please let me know what you think of this project in the comments; I read every one and will be sure to reply if you have any questions or suggestions!