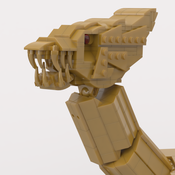 The Argo II is a ship created by Leo Valdez featured within the series The Heroes of Olympus, the continuation of the best selling Percy Jackson and the Olympians series. The vessel was created to transport the demigods of the Prophecy of Seven; Leo, Piper, Jason, Frank, Hazel, Percy, and Annabeth, as well as their satyr chaperone Gleeson Hedge from America to the original home of the gods in Greece to prevent Gaea from awakening and destroying the modern world.
The model consists of 6092 pieces and features the two decks of the Argo II which contain the quarters for all of the heroes as well as Coach Hedge, stables with an opening bay door, the engine room, the sickbay, and the mess hall. On the main deck there are two poseable ballistae with spring loaded shooters as well as two catapults which can launch deadly canisters of Greek Fire. The figurehead is the repurposed head of Festus which can be posed with the ball joints within its neck and head.
I have created this behemoth model over 50+ hours over the last month, and I believe this could become an excellent set if it reaches review. Please consider supporting this project, it has truly been a passion project for me, the Percy Jackson series has been a major influence in my life and in many others.