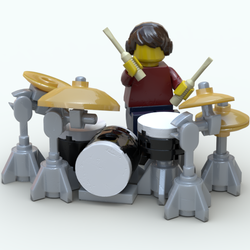 Woof!   Woof!  It’s the Lego Dog Project!   Who doesn’t want an adorable little Lego dog?  Well here are 3 of them.

The biggest dog is brown with a read collar.  Making it was hard because it involved mainly scavenging for brown pieces that were being used on other models.  This dog also has a cool tennis ball accessory made of apple green bricks.  He has a picture next to my real dog.

The second dog is yellow with all sorts of details and a less basic design than the first (even though it is smaller).  He has a 2-by-2 smooth plate nose and adorable little eyes.  Awww…

Finally, the smallest dog has an extremely simple design, but simple doesn’t mean ugly!  He has 2 small ears.

That completes the collection!  If you want one of these dogs, the first step in the adoption is to support the project!