GLaDOS and Others (All From Portal 2) 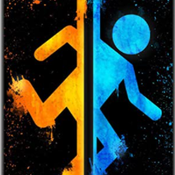 Hello, Aperture Fans! This is my replica of GLaDOS, with a fully functioning turning function. This set also represents the other characters from the game like: Wheatley, Atlas, P-body, turrets, and so on.
I always loved the Valve game, Portal 2. I actually played Portal 2 before playing the original one. I loved the characters, especially the one and only, GLaDOS. Just as anyone would, I decided to make a replica. At first, I was doing it just for fun. I also wanted to do it a quickly as possible. The final things was messy and looked liked a child did it, but hey, I still liked it.
That was before. I now wanted to remake it again, but this time, to really show off my skills. I destroyed my build and went from reference. It was hard to get all the pieces to make the right effect of detail. Another problem was that I was worried that I didn't have enough color pieces of the same color to make it work. I still got it to work though, allowing the colorful pieces to be in the interior of the build. After all that hard work, I finally finished. I was so happy with my build that I even had the energy to make some cute replicas of the other characters.
I think that this would make a great set, because of all the miniature versions of the characters. Plus, the movability of GLaDOS would allow kids to position her wherever they like.