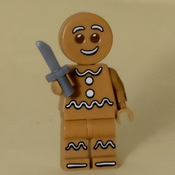 In the late 1980's international sportscar racing peaked in what was called the Group-C series. Those cars were the fastest and most powerful circuit racing cars even up till today - producing up to 1100 horsepower, reaching speeds in excess of 400 kilometers per hour (245+ mph) on the straights, creating downforce several times the cars own weight allowing high cornering speeds creating up to 3.5-4g's.

I tried my best to create a faithful model to honor this legendary racing series. It consists of approx. 1100 parts and was fully designed in the LDD.

I think the LEGO Creator theme could benefit from offering more large scale race cars such as the wonderful Ferrari F40 set. Maybe my creation would be a fitting addition?