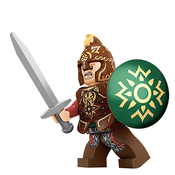 Get ready to build up a village, plunder your opponents, and defend precious resources! This Lego model is a reincarnation of the award-winning game Clash of Clans, by Supercell. It contains a complete village, along with troops, spells, and more!
This model is designed so that anyone can enjoy it, even those who have never played the game. Clash of Clans is the highest grossing mobile game of all time, so it would most likely be a very popular Lego set.
This model has a modular design and interlocking walls, just like a real Clash of Clans village.
It contains a large variety of buildings, so that resource production, collection, troop training, construction, and defense can all be simulated. The following structures are included:
A trophy and three gems are also included.
Board Game
Just like in Clash of Clans, this set grants players the ability to play in both single-player and multiplayer modes. In a single-player format, the player designs their own base, and then attacks it. The objective is to get the most damage, stars, or resources. The following troops and spells are included:
The multiplayer version of this set is ideal for two players, although up to four can play in teams of two. The game-play is the same, except that players attack each others' bases instead of their own. In the end, the player or team with the highest overall success is declared the winner.
Players also have the ability to modify the game. They can choose to limit buildings, troops, spells, and or walls. Additionally, there is the option for larger villages and attacks if they have multiple copies of the set.
Thank you for your support! I am happy to answer any questions.