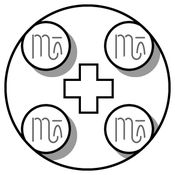 This minifigure-scaled model represents a typical ancient greek temple built in classical doric order as the Parthenon of Athens, although from an earlier period (before 490 BC), as I have implemented the archaic design (see: doric corner conflict).

In front of the eastern side (this was the main facade) an old priest is about two perform a burning sacrifice to the patron deity of the temple.

On the tympana you can see two different micro-scaled mythological scenes with gods, heroes and beasts.

The model can be divided into two in the middle, for you can gaze into the main cell. There's a lot of treasures, votive offering such as amphoras, golden cups, heroes statues (one from Egypt), but the room's main attraction is a "gigantic" sitting statue of the patron goddess (Hera maybe?).

You may know that the greek temples were all painted outside and inside too. However, scientists still aren't sure about the exact colours in any of the cases. I've included a coloured "B version" here just to show you (as a possibility) how a temple like this could looked with colours. Though I must admit, the "A version" is still somehow closer to my heart - I can't get rid of this old cultural stereotype that the greek temple must be shining white!

I have made his model 3 years ago, with the LDD's basic set, for I could later efford to built it in the real life out of many not-too-special bricks. I consider this simplicity to be a good challange, even if the final product looks like a vintage LEGO set, maybe from the 80's-90's... Well that was my childhood! - So I think this nostalgic ambience is not a stylistic flaw!

You can check the hi-res pictures in this Google album: bit.ly/LEGO-ancient_greek_temple
and/or visit my Facebook page here: facebook.com/brickdesign.ma