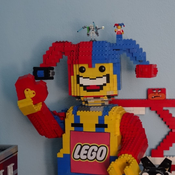 The Airbus A380-800, or most commonly called Airbus A380, is produced by the European manufacturer Airbus until the production  comes to an end in 2021.

Back in the 90s, Airbus announced the project of a wide-body aircraft in order to challenge the dominance of Boeing. The project was known as A3XX. In 2000, the project A380 was announced , and consequently it became a direct competitor to the B747.

The first flight was in Toulouse, France, on 27th April 2005. It was firstly delivered to Singapore Airline on 15th October 2007.

The full-length double-deck aircraft, sometimes nicknamed the superjumbo, has a seating capacity of 525 passengers, although it is certified for up to 853 passengers. It is powered by 4 Engines Alliance GP7200 or Rolls-Royce Trent 900 turbofans providing a range of 8,000 nmi (14,800 km).

My design is approximately 1:220 scaled. The dimensions are 33cm long and 37cm of wingspan. It has enough detail to recognize the iconic shape of this big bird. Moreover it’s a small model so you can display it anywhere you want. The livery is the factory livery used in test flights and demonstration flights like at Farnborough or Le Bourget (2017).

As the Concorde, the A380 has become an innovation symbol of aeronautics.

If this model becomes a lego set, AFOL and Aviation lovers will get a chance to build this iconic aircraft from the beginning of the XXI Century.