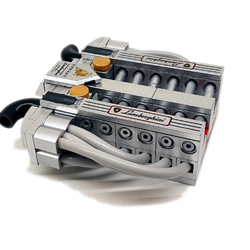 One of the most legendary and successfull rally-cars ever built:
The Lanica Delta

After the end of Group-B-Rally, Lancia had to build a close-to-production rally car for thr Group-A-Rally. They decided to use the Lancia Delta, which was a good idea. In 1987 they easily won the World Rally Championship and kept winning until 1992. All in all Lancia became the most successful marque in the history of the WRC and the Delta the most successful rally-car.
This is the road-going version based on one of the latest versions, the Evoluzione II model.

I have built this car already some time ago. But I think it's worth becoming a LEGO Ideas project, because many people like this car. An in my opinion, everyone should be able to own one

ONLY 3 DOORS?
As you look on the pictures, you wil recognize, that there are only 3 doors.Originally the car always has 4 doors. But when I was building, I created the drivers side with only one door to create a cleaner surface.
So it's up to you, which one you prefer!

If you would like to own a LEGO model of this fantastic car,
PLEASE SUPPORT!

Please, also check out may other projects: