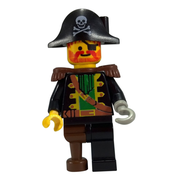 By PirateTales
74 comments
Ohoy pirates! Can you help Captain Redbeard escape the imperial prison on Lostmans Island?
While sailing the Caribbean Sea looking for treasure, captain Redbeard was caught by imperial soldiers. They sent him to their most remote prison located on Lostmans Island. Can you find a way to break captain Redbeard out of prison?
The prison is the most notorious of them all because of the tides. With high tide, the prison cave will be almost completely filled with water giving the prisoners a low chance of survival. However, there is a pirate rumor saying that with low tide, if you know where to look the cave can be opened from the outside.
The first floor of the tower is where the imperial soldiers sleep and live. It has a big hatch in the middle of the floor to throw down the prisoners and occasionally some food.
The second floor is Captain James’ office and where he keeps the key to the prison. The most noticeable in the office for a pirate might be the diamond of the seven seas. The legend says that whoever possesses the diamond will get the power to rule over all the seven seas.
On top of the tower, you will find lieutenant Andrew. He has a good eye and a sharp mind when it comes to spotting pirates and other threats. Behind the dock is a small beach where sleepy Edward spends most of his time. He is not the most hardworking and was dropped off on the island by an imperial ship delivering supplies.
This model can be used in any pirate and imperial landscape as well as a standalone. The model has a modular structure. It’s made up of 2137 pieces. There are 3 pirate minifigures, 3 imperial soldiers minifigures, 1 skeleton, and 1 crab.
For me, LEGO is all about creativity and play. This build gives a lot of different opportunities for play; Open the cave and rescue Redbeard, climb on the rocks and greens beside sleepy Edward, fight the imperials and steal the diamond. What I like most about LEGO sets is hidden functions that make the build dynamic and encourage play, that is why I created the cave opening. In addition, to play I focused on the aesthetics to make the model interesting to look at, so it also could be a nice display model.
When I was a kid my favorite LEGO theme was pirates and imperials. The theme brings back childhood memories and imagination. I wanted to make this model to bring back those feelings and share them with the LEGO community. I have seen a lot of excellent imperial sets as LEGO Ideas, and I really hope that LEGO will produce an imperial ideas set at some point.
Thank you for your time and consideration!