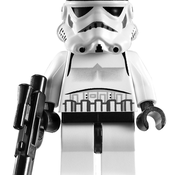 May I present to you my UCS scale Kylo Ren's Upsilon Class Command Shuttle.

The Upsilon Class shuttle is a multipurpose transport utilized by The First Order as an armored shuttle for high class dignitaries and top ranking officials.  Armed with twin heavy laser canons and advanced sensor suites, the upsilon class shuttle is able to monitor and scan enemy communications to effectively avoid hostile encounters.  Inspired by decades of Imperial Shuttle design, it mimicked the Lambda Class T-4a Shuttle, and was upgraded with powerful technologies.

Hello fellow LEGO enthusiasts! I hope you like my version of the Command shuttle, I spent over 2 months perfecting the model.  It includes 3 minifigures, Kylo Ren and 2 First Order Crew.  The wings are able to fold inwards when the ship is landing and outwards when in flying mode.  The wings may be in any position when on the stand.  The set also features an opening cockpit and the tops of the wings are removable to make it look as if the ship is in laded mode.

The model contains a maximum of 2,600 parts, in my opinion its the perfect scale for a UCS.

Let me know in the comments what you think could be improved on as I will be making some updates in the future.

Thanks for looking and if you like it, please vote!

Also please check out my other builds.