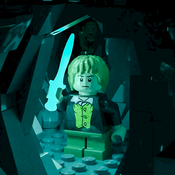 Deep in the Grey Mountains live a small tribe of wary but friendly Dwarves. Their home and workplace is carved into the side of a precipice and the only way to reach it is along a treacherous path. If you win to the door of their home, they will most certainly let you enter.
Once inside you will find the Dwarf women preparing a splendid meal in the kitchen while alternately taking care of their children. Descending the ladder to the middle level, you will be greeted by a sooty smith hammering out weapons (They trade them for food and supplies.) In another corner you will see several sets of full armor on racks. Taking the ladder to the lowest level you will gasp in awe at the seams of gold that flow like rivers through the stone.
This model is constructed similarly to a modular building, with three levels that can be easily separated. Multiple walls on all three levels are removable for easy access and play.
The top floor contains a large table for feasts, a fireplace for cooking, a small side table for preparing food, a wooden wheel with a chain attached to raise and lower a bucket, and many other domestic features.
The middle floor contains a Dwarf smithy and armory, plus other details in the nooks and crannies.
The lower floor contains a mine with gold seam detailing and a wheelbarrow for shifting rubble. There is also an undiscovered crystal cave!
The roof section has a large tree with a hollow for an owl. The tree itself is hollow and used as the chimney for the fireplaces below (hence the models name). The roof also has a small pool with fish swimming beneath the surface. By the small waterfall a fish is bursting out of the pool to continue its journey upstream. On one corner of the roof there is a hidden hatch that reveals a ladder leading to the top floor.
Both fireplaces include a light brick for a glowing fire effect. The bucket on the chain can be raised and lowered by turning a nob on the side.
This set contains 8 Minifigures, three baby figures, an owl, three mountain rabbits and three bats. Four of the Minifigures are dwarf men and the other four are the first ever dwarf women! The three baby figures have mustaches on them (They are the first ever dwarf children!)
This Idea would be a really fun way to bring back classic Lego Dwarves that appeared in some Lego Castle sets. The inspiration for this build came partly from the Lego Castle Dwarves’ Mine set, number 7036, from 2007
If you, like me want to bring back the classic Lego dwarves, be sure to share with your friends and hit that blue support button!!
If you like this build be sure to check out my other project: Rugged Cargo Ship. https://ideas.lego.com/projects/a823293f-0278-4c53-88f7-74d178fef717