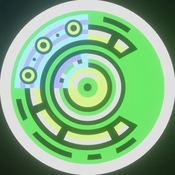 By Cronibet
6 comments
This is a re-creation of a game called OCO which is a round platformer game, where you, the white square player jumps around the circle's surface, while collecting bits (yellow squares) to complete levels and user created ones too, as well as competitive action against other players and more.
I have been playing this game since 2019 when it got published to app store and I have always loved it since then. I came up with this idea about some years later to make this one.
Now, let's move into this LEGO creation.
This build is functional!
The game has a level editor, there you can create your own levels. In this LEGO set, you can put out "bits" randomly as you want around the level's surface (studs), as well as you can see the player fly up from a blue platform called "launch" (you fly up), and you can put the player anywhere in this set as well.
On top of that, levels spins in the real game, so in this set, you can actually spin the whole circle by hand by support from a technic pin (without friction) inside the black frame (the background) attached to the circle platform.
At the bottom of this set, you can see some OCO text on its base, that keeps it stable from falling.
There you have some more bits you can place on the level.
I believe this would make a great LEGO set because the game needs more attention at its current state. It needs more support to grow to a bigger community, and I wanted to support the game with this creation.
I believe this is also fun to play with, especially for kids/adults. It's way more than just a decoration.
You can also see its hollow with a transparent brick, yes, levels has a hole in them in the game. :)
The "OCO" game is developed by Philip Sinclair (SPECTRUM48). Created in Stud.io by me (Render quality: High + Piazza)