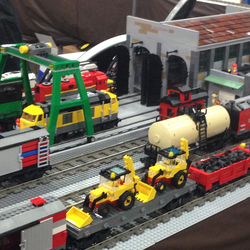 SwimMaster
29
This model is based off of a North-Western Locomotive that is typically found in train yards or sorting yards. This engine bears the Union Pacific colors and name, while it doesn't have power functions in it, the new Powered Up system will fit inside. You would just have to remove the drivers seat. It features forward and rear facing headlights, it also has the two engine stacks. The under carriage features a fuel tank and the boogies are independent from the couplers. It has just one minifig, the engineer and it would have 4 pieces of straight track on which to display the locomotive.
If you would like to see this project hit 10,000 supporters and possibly go on the shelves, then be sure to tell your friends and family to support too! Thanks for your support.
29