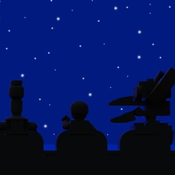 Hey, it's been about... 11 months since I last updated this project. Yikes. I apologize for my infrequency and lack of communication, school takes up a lot of my free time, so I'm sorry. But in my absence, the project has made it to over 9700 supporters, with many newcomers in the past several days! So, I've compiled a small update before it reaches 10K, as a last hurrah for the end. First, it's a proper Satellite of Love! 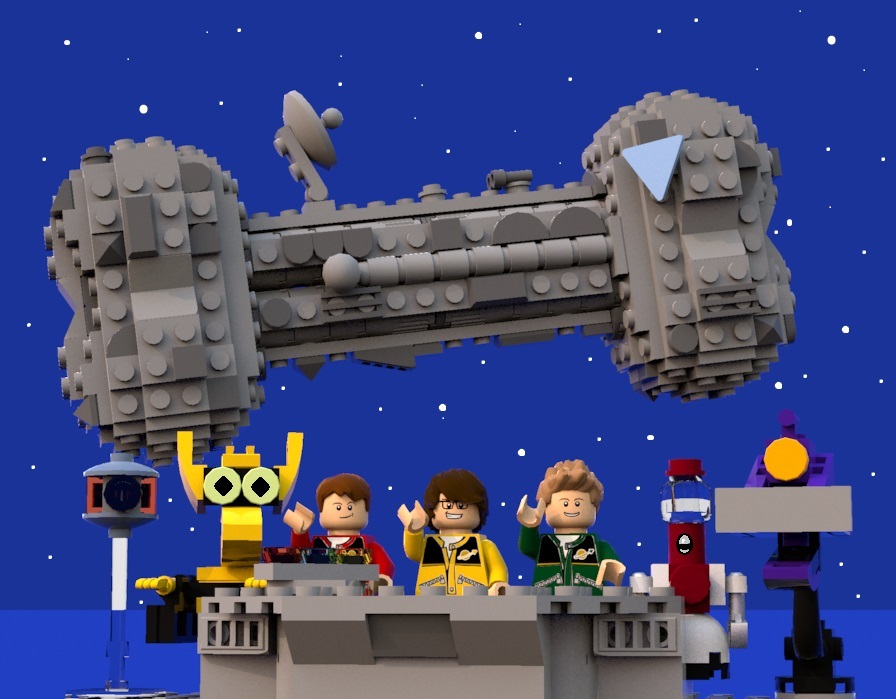 I always kept price in mind when I designed the original set, so I didn't make a UCS-scale Satellite of Love that would cost $200+ dollars, but having a proper Spacecraft would be nice, so I went with a mid-scale replica that could look nice hovering by the brick-built Moon I made. The keen-eyed among you may also recognize some different looking Bots among the lineup, and you'd be right! 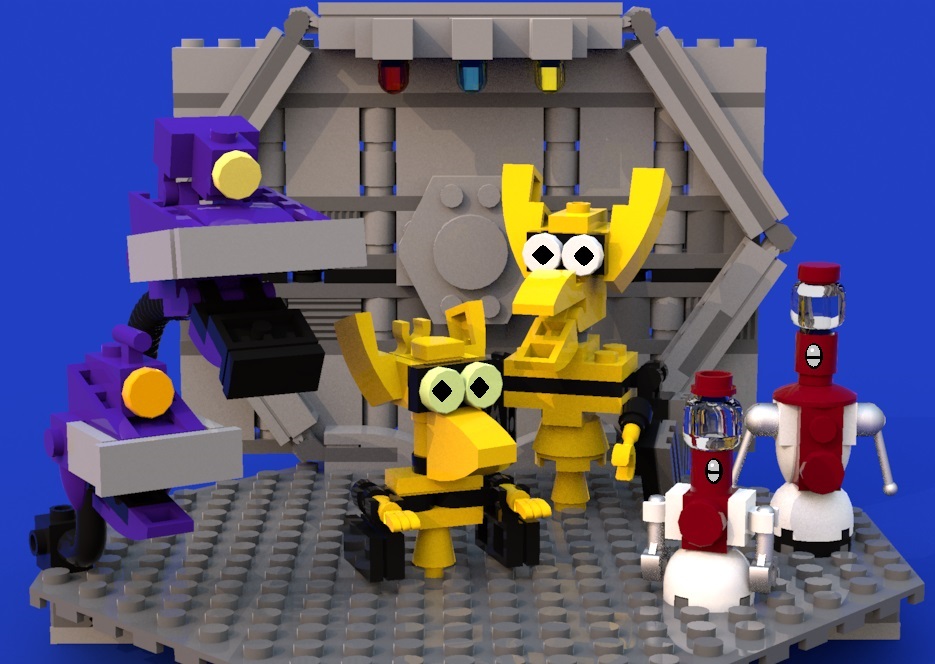 I've gotten a lot of critcism directed at the scale of the 'Bots, most notably Crow. I wanted my Bots to look accurate to the sorce material *and* fit in with the set, so my orignal designs were pretty out-of whack at the time. But, as time went on, LEGO added more parts to LDD and I saw how massive they were, so I decided to make it easier for a possible set release and made some Mini-Bots! The original versions I made are in the back, and my newest ones are in the front, if you can't already tell. It's a shame that Crow can't open his bowling pin anymore, and still isn't in the right scale... but I'm proud of myself for finding that those fork pieces are the PERFECT Crow hands! If this is made, my single request for the designer is to use those pieces for Crow's hands, please?

Well, I also wanted to thank you all so much for your support, and a few of you have gone above and beyond in your support of the set. I wanted to personally thank users COGInk, Callkathy, and The Real JacksonLink for their support of this project. BIG thanks to Joel Hodgson, Frank Connif, and Jackey Neyman, stars of the show and an actress on one of the films viewed, for spreading the word and offering their support. The MST3K Revival League on Facebook, especially Deana, Gary, and Greg, were a huge help in reaching fans of the show for the project, thank you. Of course, I'll always appreciate my family's support of the project, and their kind words of encouragement on this journey.

Well, we'll make it to 10K soon enough, thank you and I'll see you some other time!

Revival Imminent! POD PEOPLE, THE FINAL SACRFICE, and thanks to a very special person!

Hello, my wonderful supporters! It's been a while! So, with the new season of our beloved show upon us, I went and made an update on two of MST3K's best episodes! First, the shoody E.T. knockoff about a boy befriending a pair of murderous aliens... and some poachers stealing nightingale eggs... and some beatniks and a hippie in an R.V... and a cabin in the mountains... and, oh forget it, it's Pod People! Plus, the poorly told tale of two strangers, a small, frail, geeky teenager, and a large, mustachioed, hockey-haired drifter, it's The Final Sacrifice! 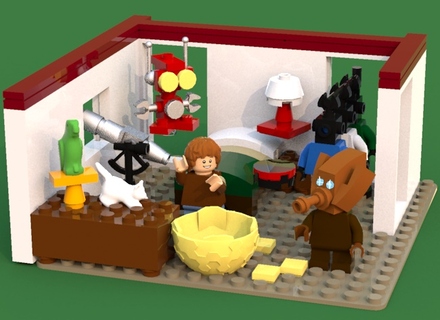 First up is "Trumpy" (what the kid named the... alien thing), doing "magic things" in the boy Tommy's room... complete with his egg, Simon Says, robot, telescope to see Africa, and flying clothes! I hope he knows that what Trumpy's doing is called evil, kid... 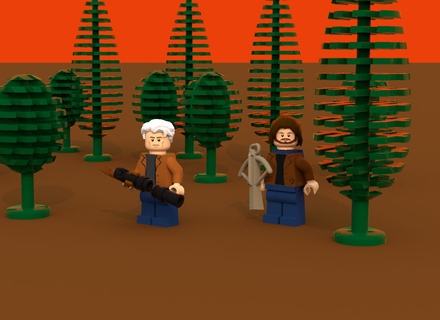 Huzzah! Our creepy poachers from the film, with who appears to be a bitter version of Leslie Nielson, and some crossbow weilding Renaissance festival dropout! 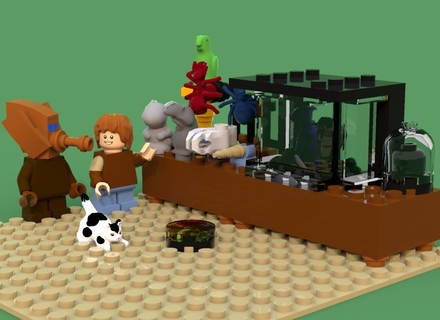 Oh, yeah, did I mention that the kid collects-quote on quote- "specimens"? Yeah, Trumpy up there was going to be a part of his collection... thankfully he wasn't... 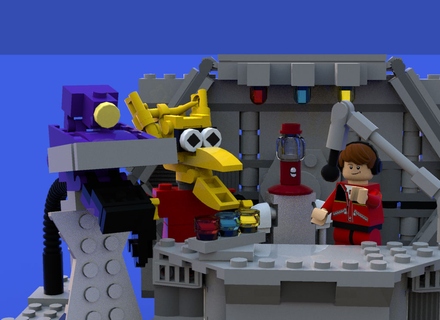 Here are the Bots and Joel singing their version of the previously stated beatnik's song from the film. Nither make much sense, however. But it's all in good fun! 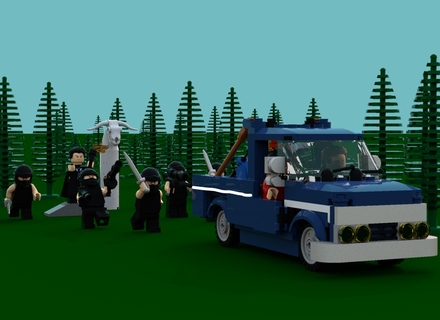 Off to Final Sacrifice! Here are our protagonists Zap and Troy fleeing from wicked cultists in Zap's laundry-ridden truck from the strangely deep-voiced leader, Satoris! 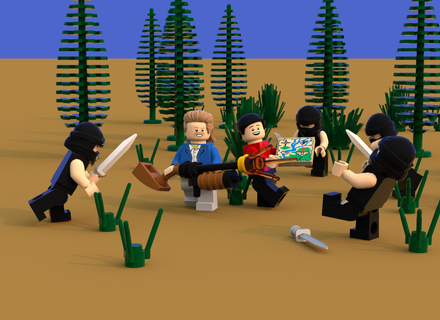 ZAP ACTIONSDOWER! Here is Zap dealing with the tanktop-wearing masked henchmen of the cult! 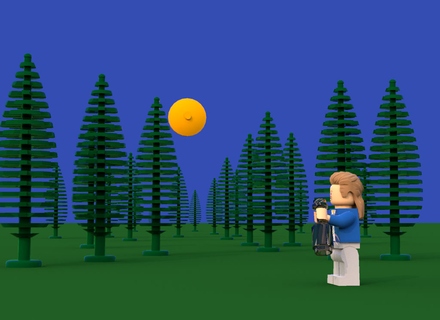 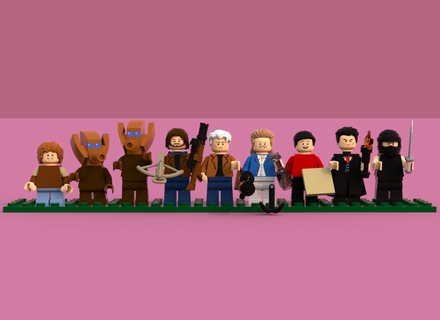 And here's the full lineup of figures, from left to right we have Tommy, "Trumpy", the alien's mother, the Renaissance fair poacher, the older poacher, Zap Rowsdower, Troy McGreggor, the cult leader Satoris, and the henchmen of the cult.

Also, I was incredibly humbled to see that Joel Hodgson- original star and creator of the entire show- asked Kickstarter backers of the revival season to go and vote for my project. Joel, thank you. Thank you for lending your support to this project, thank you for spreading the word, and thank you for, well... making this wonderful show in the first place! I hope you know how amazingly grateful I am for all you've done, I am honored, and I appreciate it. This is wonderful, thank you so much.

Here's to a new season of a wonderful show! 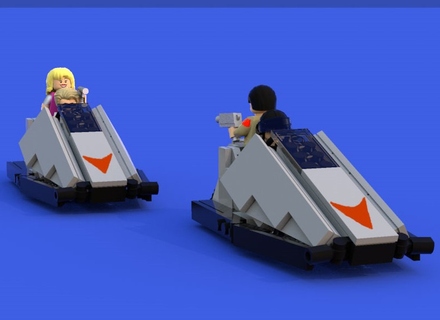 Hello, and HAPPY NEW YEAR friends and supporters! It's been a while! Sorry about the infrequency of these updates, they take longer than I'd like, and life gets in the way, BUT... I thought you guys might like this! Over the years, we have been given great Science Fiction films by talented filmmakers, from Star Wars, to Blade Runner, Star Trek, and 2001: A Space Odyssey... this film is not one of those. Based off the season 8 episode of MST3K, it's Space Mutiny! The movie follows Brick Hardmeat, I mean Dave Ryder, as a "Mutiny" on board a "Space" ship occurs, and- together with Dr. Lea Jansen- must defeat the evil Kalgan! I decided to make the police bumper cars from the movies, or "Enforcers", from the most thrilling high-speed chase scene in movie history... that could be out paced by an elderly man. 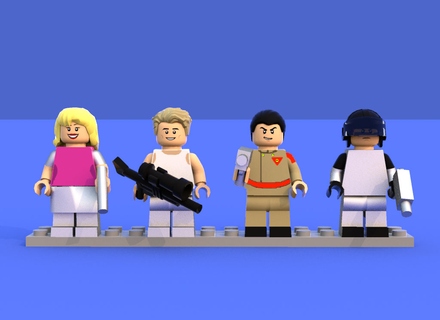 From left to right, we have Dr. Lea Jansen, the daughter of Commander Janson and love intrest of the next character... Rip Steakface, er, Blast Thickdeck, or... Gristle McThornbody, darn... Dave Ryder! The muscle-y protagonist, who loves shouting gibberish in his enforcer. Next is Kalgan, the leader of the mutiny, whose name sounds shockingly like a certain laundry detergent. The last figure is a mutinous Enforcer driver, who likely dies by falling off one of the many, many railings in the film. Speaking of that... 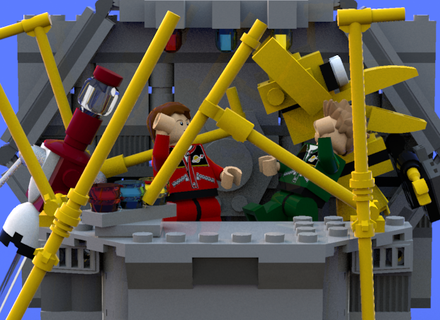 I have to go take down Tom's railings... he got, uh... "inspired" while I was making this update. Oh well, I'll get back with an update as soon as I can, assuming I don't trip over his "Ankle-high" railing around the rug... See you on the road to 10000! 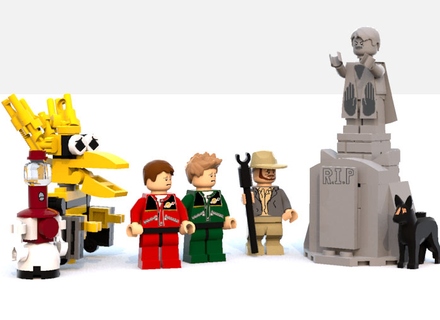 Hello everyone, sorry it's been a while since I've uploaded anything, but... I had to talk about this. On November 14, 2016, we lost the talent of one Tom Neyman, famous to us for his role as The Master in "Manos: The Hands of Fate". The artist died at the age of 80,  only three days away from the film's 50th anniversary. He is succeeded by his daughter, Jackey Raye Neyman Jones, who also starred in "Manos" as Debbie, and is currently creating a follow-up feature film to "Manos", called "Manos Returns", starring her father posthumously. I know, it's weird for me to talk about the passing of an actor from what is considered one of the WORST films of all time, but I think we all know it's more than that. It's practically a pop-culture phenomenon, due in part to Neyman's iconic performance as the Master. Not to mention that, he seemed to a kind-hearted, genuine individual, one everyone that knew him will sorely miss. You know, while "Manos: The Hands of Fate" is a strange film to watch, Tom's passing will make watching it far more bittersweet. I wish my sincere condolences to Jackey, as well as his friends and family. We will miss him.

3500 Supporters! The New Hosts, New Bot Builds, and Many Thanks!

As we reach closer and closer to 5,000 supporters, and later, 10,000, I just feel the need to show my immense gratitude for all of your support. To do that, I went ahead and created the new hosts of the MST3K Revival! On the far right is Patton Oswalt's character, the Mad TV's Son of TV's Frank! In the center is Jonah Ray, the new human test subject in the show! Finally, on the right is Felicia Day's character, the new Mad Kinga Forrester! 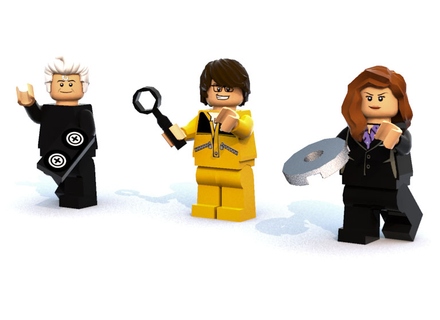 In addition, many of you commented on my builds for the Bots, with several of you commenting on the scale of the characters, particularly Tom and especially Crow. So, I made some new slightly smaller builds for Tom and Crow, including an entirely new build for Crow's, um... hair? 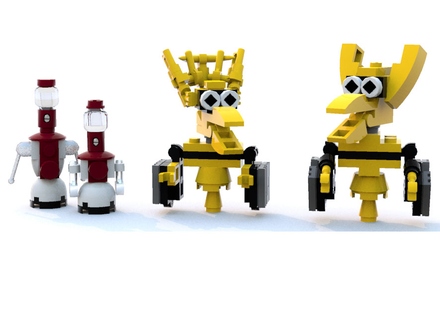 Last, and perhaps most important of all, is a big thanks to all the people and websites that helped spread the word. As there were so many sites, I'll go ahead and list them all out here.

To everyone on these websites, thank so very much. Oh, and a very special thank you to Frank Conniff, one of the original cast members who happened to post this project on his Facebook page! Frank Conniff, you have no idea how helpful that was, I really appreciate it, thank you. Well, I hope this makes it to the review! See you soon! 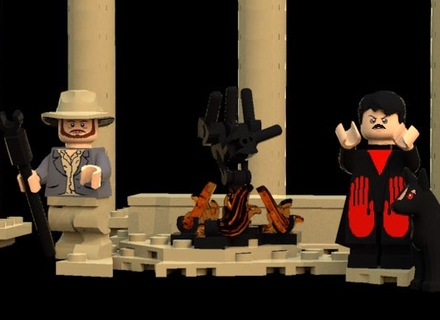 Well, thanks to your support and spreading the word, we have reached over 1000 votes in only 5 Days. For that, I am incredibly grateful to every single one of you. To better show my appreciation, I decided to make a LEGO version of one of MST3K's best known episodes, "MANOS": The Hands of Fate!

Just about any fan of MST3K knows about this much-hated film, yet we love it for its awfulness. This little vignette features the ever-affable Torgo, complete with hand-staff, mismatched and dirty clothes, and enormous thighs. Also included is the sinister Master, complete with his famous robe featuring two massive red hands, and his adorable killer dog. To top it all off, it also includes the tomb where the Master sleeps, complete with pillars, bed-slab, and the titular "Hand of Fate". I hope you enjoy this update, and keep spreading the word! For if you don't, the Master will not be pleased... : )