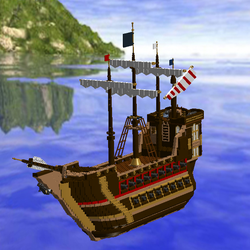 This project is a corner modular building featuring a pizza shop and an arcade with a balcony. Some main features include the external stairway that leads to the second floor where the living quarters and balcony are located. This building is segmented into two disinct parts: the pizza shop and the arcade. Each side has it's own unique qualities.

The first floor of the pizza shop emphasizes a traditional restuarant with masory columns which lead to hemispherical canopies. A main feature of this side is the large sign that says "NICK'S" over the entrance. Also, each column is adorned with lamps to add an extra quality to the overall design. The second and third floor feature a bowfront window series reaching to the roof of the building, as well as indented windows to create a differentiation between wall and window.

The arcade side is just as unique as the other. It features a retro game controller as the logo over the entrance as well as stopping at the first floor to reveal a balcony. This is also the side that features the exernal stairway that separates the two sections of the building. The second floor balcony features tables and chairs, overhanging flowers and a doorway with arching windows on either side. The third floor expresses a more original downtown apartment look with its 4-paned windows and overhanging flowers in addition to a sloping and angled roof.