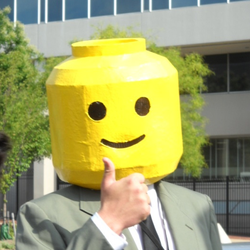 Jeremy gets turned into a minifig.

James gets turned into a minifig.

And Richard... gets turned into a minifig.

Top Gear is a British television series about motor vehicles, primarily cars, and is the most widely watched factual television programme in the world. It began in 1977 as a conventional motoring magazine programme. Over time, and especially since a relaunch in 2002, it has developed a quirky, humorous and sometimes controversial approach. The programme has received acclaim for its visual style and presentation. The program has been described as a triumph of the craft of programme making, of the minute, obsessive, musical masonry of editing, the french polishing of colourwashing and grading. Top Gear is considered to be one of the most watched TV series with 350,000,000 viewers world-wide.

My goal in designing this set was to create an homage to Top Gear by recreating some of the most memorable elements of the show... while maintaining a realistic part count. Construction techniques include standard stud on top mixed with studs not on top (S.N.O.T.). Parts include a mix of standard, sloped, solid, transparent, technic axles and connectors, and hinges...

Maybe, if this becomes a reality, it could be co-branded with LEGO Speed Champions.