A Police Special Force Base 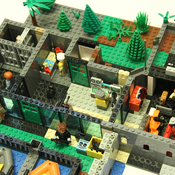 I believe that the project can be a part from the Lego city police, just like the swamp police station set that has a different role from the standard police force.