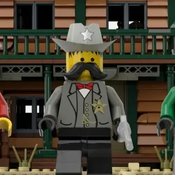 The Project:
I've always been a huge fan of the classic pirate sets. Great ships, awesome forts, wonderful adventures. The Islanders were somewhat overshadowed by pirates and soldiers. When I was a kid, I never had a set of Islanders, but I always dreamed of them. I've always wanted to build their village. My project presents an island community on tiny islets where previous generations had carved an idol into the rock. This idol is used as a shelter, as the focal point of the village.
I believe that such a set would be a great complement to the classic sets from the 90s and would also perfectly match the new pirate set.
The project includes:
Minifigures:
The Story:
A tribe of Islanders lives on a forgotten small island where an idol has been carved into the rock. Nobody remembers anymore who and when they did it. One of the sides has long since collapsed. It is also overgrown with vegetation and on the inside, it is decorated with bas-reliefs.
A few years ago, a ship crashed near the island. Since then, from time to time, the sea throws its elements ashore. Islanders use these elements to decorate the idol. Some of the survivors from the sunken ship also managed to swim to the shore of the island. Not all of them were very friendly - since then, one of them has been locked in a hanging cage and the other in prison.
The commander of the shipwreck adopted the customs of the islanders and has lived in the tribe ever since. He is currently engaged in fishing.
Life in the tribe is peaceful. They go out to sea for fish, pick coconuts, raise pigs, and grow vegetables. In the evenings, they light huge bonfires, play drums, and dance.
The project consists of approximately 2,700 elements. My design also includes classic Islanders vivid colors red and blue
Can you guess what ship sank nearby?
Write your answers in the comment.
Forgotten Island - 3D View