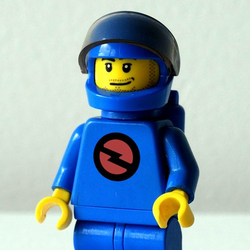 Zoïds are plastic toy models that look like animal-shaped robots produced since 1983. Two lines were released in different parts of the world at the same time in the 80s. We call them the Original European Release (OER), and the Original Japanese Release (OJR), so same models can have different names depending of the line they're from.

Here is a reproduction of Tyrannazoïd (for Europe and North America) aka Garius (for Asia), a tyrannosaurus-type Zoïd.

Tyrannazoïd is 36 cm height. Its battery pack makes it very heavy and prone to toppling, but it moves on very nicely and looks much alike its original model (that was only 11 cm height).

It features claws that can close and rotate to catch ennemies. Spines and cannons can be re-orientated.
Imagine an army of Tyrannazoïds controlled by one remote-controle !
The conception allows user to remove main parts easily (arms, claws, stomach-receiver, tail, cannons, feet, and of course the cockpit). Changing batteries is also easy, using a simple Technic axle to unlock the battery pack from the body.

The toughest part to concieve was the cockpit. No wait... the legs, definetly the legs. Or was it the tail ?