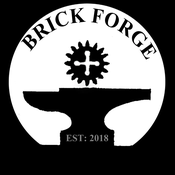 By Brick Forge
87 comments
See the free instruction of my lathe on Rebrickable
A lathe is a workshop machine which is used to create round workpiece out of metal, like axles, pins, screws, bolts, rims, but also everyday objects, like round handles, knobs and several other round metal pieces. For some pieces exist special lathes, but I have built a classic universal lathe. It is used for standard pieces, prototypes or repairs at the tool shop.
During my apprenticeship, I often worked with such a machine and I really enjoyed it. So I thought, it would be interesting to create a LEGO version of it. Even I built it in minifigure scale, I wanted to add a rotating three-jaw chuck and a driven longitudinal feed. Every function can be controlled with the knobs on the side, but you can also tilt the lever on the top of the machine to activate the automatic feed. This means, the tool slide moves, while the three-jaw chuck is rotating. In order to have a nice display model too, I built it the machine in the typical green and added several details, like the levers, a lamp, a control cabinet and the very important emergency-stop switch.
Functions:
·        Rotating three-jaw chuck
·        Can hold pieces from the size of a bar, up to a 2x2 brick round
·        Driven longitudinal feed
·        Automatic longitudinal feed
·        Tool holder can be moved on every position across the cross feed
·        Headstock can be moved forward and backward
·        And can support workpieces, if they have a round hole
·        Front cover can be removed to see the gears
·        While building, you will learn the most important components of a conventional lathe
This lathe would look great in every LEGO workshop, tool shop, car workshop or factory, but also as a display model. It´s also the perfect present for a locksmith, metal worker and toolmaker, but also for every hobbyists and LEGO fan who loves building workshops.